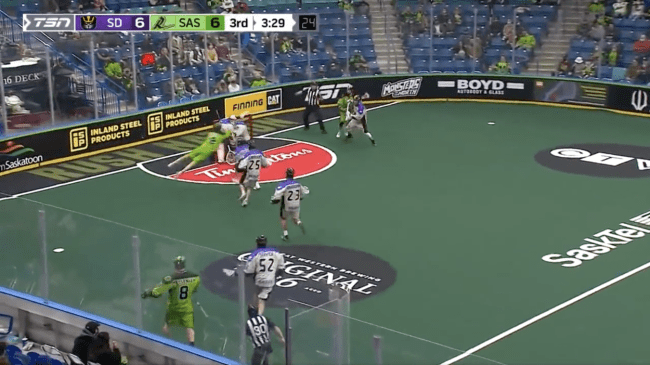 Kodak Black had himself a night at the Panthers game last week and a video went viral of him getting twerked on (maybe more) in one of the team’s luxury boxes. A few days later, a National Lacrosse League hilariously trolled him for his actions during his call of a crazy awesome diving goal.

If you have not heard by now, Kodak sparked a debate across the internet about whether he and an unidentified woman were grinding on one another or doing the nasty in plain sight during the Panthers game. One day later, his girlfriend (who was not the woman in the video from the game) dumped him. Makes sense.

Florida won the game 5-2 and are beating the brakes off of everybody of late. Clearly, Kodak was bored by the beatdown and kept himself entertained by getting after it with the woman in the box.

Well, if he had been in attendance at Saturday’s NLL game between Saskatchewan Rush and the San Diego Seals, he might still be in a relationship. So says the announcer indirectly, at least.

Late in the third period, Seals defenseman Matt Beers scored one of the craziest goals that you will see in any sport. After a slick series of passes, Beers went full-send across the crease and scored.

It was SportsCenter Top 10 worthy.

On the call, the announcer savagely said that the goal was so good that Kodak Black may have even paid attention. The hilarious chirp came late in the call during the replay, but it was worth the wait because it’s so unexpected.

Come for the goal, stay for the Kodak Black troll.