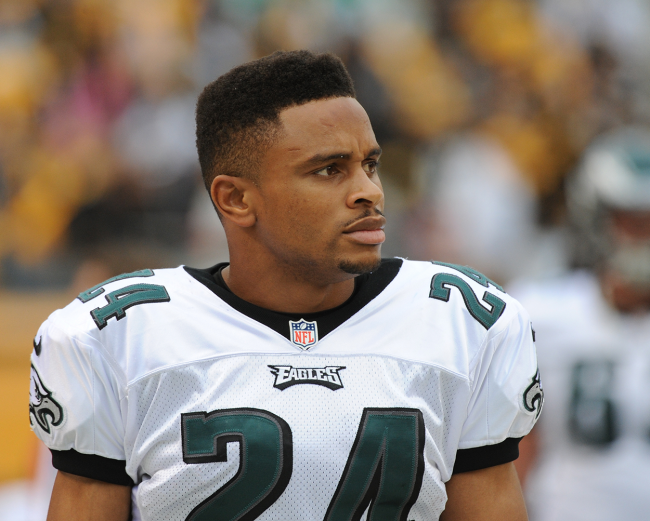 Nnamdi Asomugha was one of the most sought-after defensive free agents of the millennium when he hit the market in 2011. Eventually, the former first-round pick, who spent the first seven years of his career in Oakland, signed with Philadelphia.

Asomugha signed a five-year, $60 million contract with $25 million guaranteed. It was a big deal given to a player that had been absolutely dominant with the Raiders.

But it did not go as planned for the Eagles.

During 45 games with Oakland, Asomugha allowed only one touchdown. In 32 games with Philadelphia, he allowed nine touchdowns. He was not nearly as dominant.

Meanwhile, Nnamdi Asomugha’s Eagles teammates say that they knew he was a free agent bust from Day 1.

During a recent appearance on the I Am Athlete Podcast, former Philly cornerback Asante Samuel called Asomugha “overrated.” He was asked about the first thing he thinks of when he hears his former defensive counterpart’s name and was very candid in his answer.

“The first thing that comes to mind is how the NFL can manipulate, control the narrative to make things seem like they are not,” Samuel said. “You can’t make up no excuses for the level of play if it falls this low from one team to another. You can’t be this good over here, and then you come over here and all of a sudden you ain’t that good because of this and that.”

To back up Samuel’s claim, former Philly running back LeSean McCoy shared a story about why they knew Asomugha wasn’t as good as he was made out to be. It came during his first one-on-one with the Eagles.

… until he got burned by tight end Brent Celek. The entire feeling and narrative changed.

Eagles players knew Nnamdi Asomugha was a bum when Brent Celek burned him the first practice of training camp pic.twitter.com/CkrnjI85Yv

Asomugha was cut after just two years in Philadelphia. After a brief stint with the 49ers, he was waived in November 2013 and then retired from football that December.

Since then, Asomugha has been working on his acting career. He even performed on Broadway at one point.

Although his football career didn’t work out as planned, 41-year-old Asomugha is on to the next chapter of his life.