Noah Syndergaard Jabs Bryce Harper For Saying He ‘Wants To Bring A Title Back To D.C.’ In Phillies Press Conference 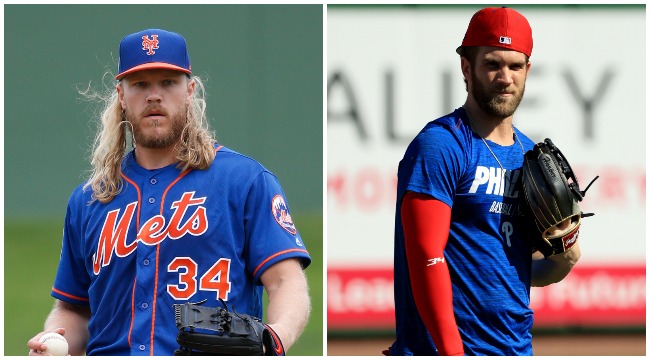 For six years, Bryce Harper has made it his mission to bring D.C. and the Nationals its first World Series title in franchise history. Welp, after signing a record-setting 13-year, $330 million contract with the Phillies and being introduced by the organization on Saturday, Harper proved that old habits die hard.

In a press conference where the 6-time All-Star said all the right things, Harper had one notable slip of the tongue. Right before talking about how he wants “to be on Broad Street on a friggin’ boat or bus or whatever it is and hold a trophy over my head,” the 26-year-old declared that he “wants to win a title for D.C.”

“I wanna bring a title back to D.C.”
– Bryce Harper
– Michael Scott

During the press conference, Harper had no idea he misspoke, but it was immediately brought to his attention by his better half.

“I didn’t really notice it until my wife told me after the thing,” Harper said. “I was like, oh man. I didn’t even notice it. Like I said, it’s going to take some time, for sure, but that’s part of it. When you grow up from 17 to 25 in an organization and you’re trying to do everything you can to win for that organization and bring a title somewhere, you’re going to have those slip-ups. That’s part of it. But like I said, I’m a Phillie and I’m very excited about it.”

If his wife hadn’t called him out for it, Mets pitcher Noah Syndergaard was on the job.

Reminds me of the time I casually called my girlfriend by my ex’s name. Those were a fun five nights on the pullout couch.