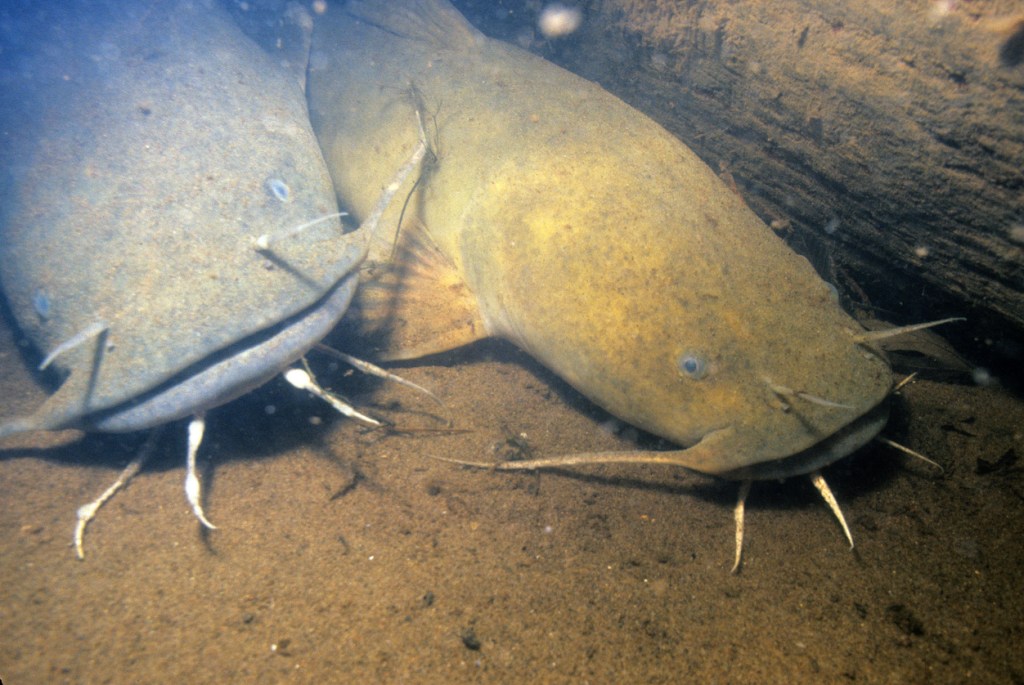 Noodling for catfish is like the Wild West of fishing. Instead of a rod and reel, fishermen use their bare hands to grab a fish by the mouth. It involves blindly searching around for huge catfish inside of muddy holes that are often inhabited by snapping turtles and snakes. Noodling really is a battle of Man vs. Beast.

Levi Bennett is an avid noodler but his wife Kodi is the decorated noodler of the family. Kodi Bennett won three straight Women’s Championships at the Okie Noodling Festival in Pauls Valley, Oklahoma.

That’s not to say that Levi isn’t an extremely respectable noodler, he just doesn’t have the titles his wife has. But now he can say he has the biggest fish in the family after he broke his uncle’s record from back in the 1960s.

On a recent Noodling adventure, Levi Bennett caught a 106-pound Flathead Catfish by hand. The current Noodling world record for Flathead Catfish is 87.85 pounds. His fish would have destroyed that record. But taking two steps back, he didn’t even think he had a shot at catching the fish to begin with! He thought he’d lost it until he discovered there were TWO enormous catfish in the water.

Levi and Kodi were Noodling in East Texas with their friend Jeremy Millsap. They were using SCUBA gear to fish a 35-foot-long pipe. Levi went in one side with Kodi and Jeremy blocking the other end so any fish wouldn’t swim out. Kodi felt “a big bump” and tells The Ada News she kicked the fish ‘as a blocker’ to keep it in the pipe.

After a few moments, Levi made his way to Kodi and Jeremy (aka Jimmy). He was worried the fish had gotten out the other end of the pipe but it was still there. Well, according to The Ada News (first to publish) the fish was still there while Field and Stream claims there were two fish in the 3-foot diameter pipe.

Levi went ‘flying back in’ the other side of the pipe and grabbed the fish. Keep in mind that he was literally battling a 96-pound Flathead Catfish with his hands so it’s not as if the fish came easy.

Eventually, Levi Bennett was able to wrestle the fish into their boat. Then it came time to weigh the fish.

Kodi remembers Levi saying “92, 94, 97!!” (pounds). Their family record was 96 pounds, a record held by an uncle who caught a 96-pound Flathead Catfish in the 1960s. Levi had been told countless times in his life that the record would never be broken. Well, they were wrong.

At 97 pounds, their friend pointed out that about a foot of the fish’s tail was still on the ground. Once the fish was fully hoisted into the air it tipped the scales at 106-pounds, which would have easily been a new Noodling world record.

In order to seek an official world record, they would need a certified scale. The options then are finding a way to keep the fish alive until it’s weighed (a live well) or killing the fish. After weighing it and taking a few photos they opted to release the fish. Bennett said “to me, it’s not worth killing a fish that big and that old just to have some record.”