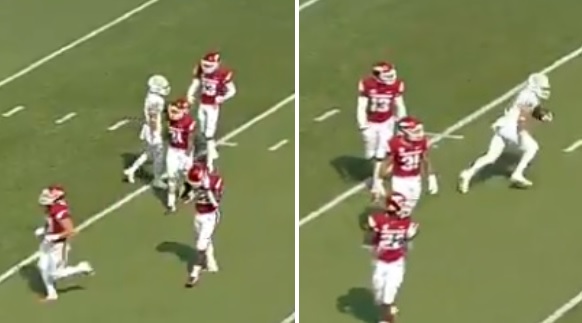 In football, coaches always tell their players to keep playing until they hear the whistle blow.

Unfortunately for Arkansas they got completely fooled by an ingenious North Texas player who sneakily faked a fair catch and went on to score a 90 yard touch down after the entire defense believed the play was dead despite the fact that the refs didn’t blow their whistles.

The Internet was obviously impressed with the play.

Fake fair catch? Right of the Little Giants playbook! Give me the annexation of Puerto Rico! #GMG

the good ole "fake a fair catch, get the other team to go to sleep and run it back for a 90-yard TD" seen here in its natural habitatpic.twitter.com/flzwYAhhkk

Sure fire #1 play on SportsCenter – the Fake Fair Catch into a punt return touchdown. That was AMAZING.

FAKE FAIR CATCH TOUCHDOWN THIS IS THE PROUDEST MOMENT I'VE EVER HAD AS AN ALUMNI https://t.co/tSUa7zYypB

That punt return for North Texas had to have nerves of godsdamn adamamtium to sell that fair catch fake out.

Some people thought the play was unfair and unsportsmanlike.

Fooled by a fake fair catch…if these boys have any pride, it’s time to start bringing it…and if it’s a close fair catch call, thump that dude next time. #Hogs #RazorbackFootball

In today's climate of protecting defenseless players, that fake fair catch needs to be outlawed. He obviously gave himself up.

Every week the 🐗 are more embarrassing. But if I’m the coach I tell them to knock the punt returner out next punt. Regardless if it’s a fake fair catch call or a real one.