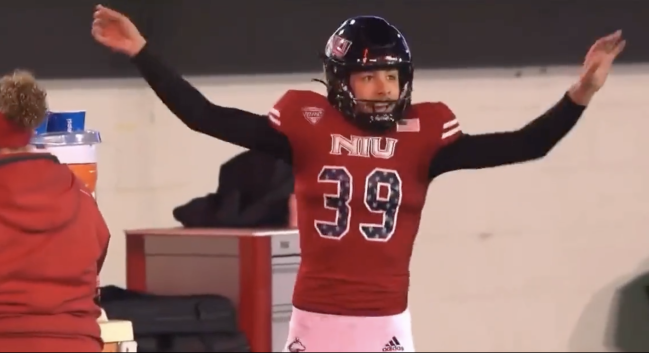 When it comes to kicker celebrations, there is amazing, bad, and nothing in between. Northern Illinois kicker John Richardson falls under the former.

During Wednesday night’s game against Ball State, Richardson hit a game-winning field goal and went absolutely berserk. The redshirt sophomore is having an incredible season and last night’s kick was just the icing on top.

After falling behind in the first quarter, the Huskies battled back to tie the game at halftime. A back-and-forth second half saw the Cardinals take a two-point lead with less than two minutes remaining.

10 plays and 62 yards later, Richardson lined up for a 32-yard kick with three seconds left and drilled it. Richardson went sprinting over to the opponents sideline while waving his arm like a windmill.

If that wasn’t savage enough, he ran to the opposing bench and held his arms out as if to say “ARE YOU NOT ENTERTAINED?!” before he was mobbed by his teammates. On his way back to his team, Richardson continued to lose his mind, threw two fingers to his right arm and let everyone know that he has ice in his veins.

John Richardson hit the game-winner for NIU and had the time of his life celebrating 😆 pic.twitter.com/44kFk5O8VC

This was not the first kicker celebration to come out of the MAC this week. One night prior, Akron’s kicker went equally as crazy after hitting a field goal late in the game. The difference, however, is that the Huskies won on account of Richardson’s leg.