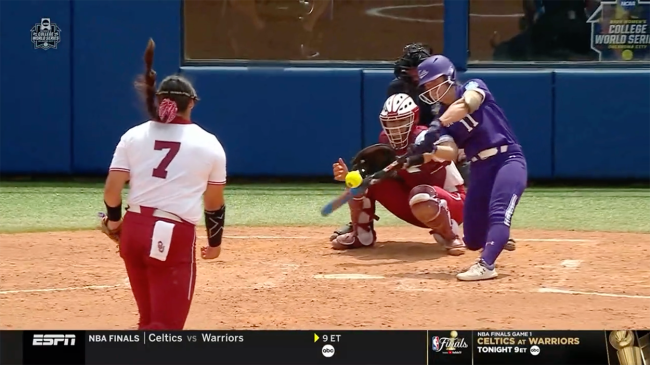 Northwestern softball made a remarkable run to the College World Series this season. The Wildcats went 45-11 on the year and superstar slugger Rachel Lewis was a large part of the offense.

As a 5-foot-6 graduate student is exhausting her eligibility in 2022, she has made the most of it.

Northwestern softball’s Rachel Lewis hits dingers. It’s what she does.

During the opening round of the College World Series in Oklahoma City, Northwestern began its quest to win its first-ever national championship with a bang.

Although they were matched with Oklahoma, which might be the greatest dynasty across all sports on all levels in history, Lewis was not intimidated. She stepped up to the plate in the third inning of a 0-0 game and blasted her 23rd home run of the season to left field.

By going yard, Lewis tied the legendary Garland Cooper for the most home runs by a Wildcat in a single season.

Home run #23 on the year for @rlewis_11 ties @GarlandCooper23's program record set in 2007 for most HR in a single-season.#GoCats | #WCWS pic.twitter.com/rBOAu5hbhq

It came less than two months after she broke the school’s all-time home run record back in April.

Needless to say, Lewis can mash. She will leave Evanston as one of the all-time greats. And she is an absolute blast to watch because if the pitcher leaves one over the plate, it’s gone forever.

A large part of Lewis’ success is her ridiculous strength. Prior to her final year in college, in August of 2021, she put up some serious weight on the squat rack.

In a video she posted to Instagram that immediately went viral, Lewis put up 300 pounds with perfect form.

To put that number in perspective, that’s like putting a refrigerator or a gorilla on her back and squatting it. Ridiculous!