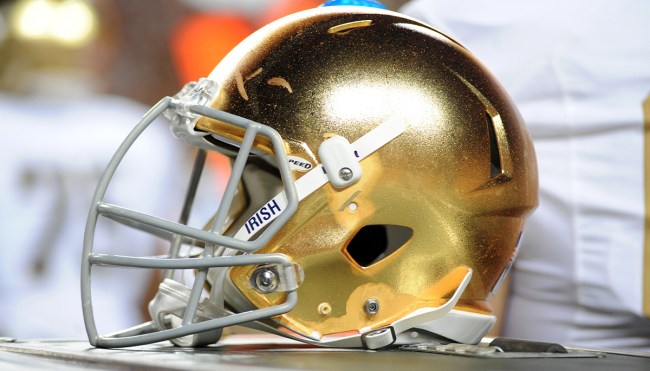 Notre Dame has one of the most storied programs in college football history, but it’s safe to say the Fighting Irish are a fairly divisive group when you consider they’re routinely near the top of the list when it comes to polls ranking the most popular and most hated teams in the country.

There are plenty of things that make Notre Dame easy to hate: fans who desperately cling to the glory days of a team that hasn’t won a national championship since 1988, the fact that many of those fans have no real connection to the school, its insistence to remain independent to keep that NBC money rolling in despite being a de facto member of the ACC, Rudy being a massive fraud…the list goes on and on.

However, there is one thing even the most dedicated Notre Dame haters have to admit: its fight song absolutely slaps.

The school’s iconic “Victory March” was first performed on campus in 1909. In 1920, it received an updated set of lyrics, and while it technically has two verses, most people only know the second one that fans in South Bend have been belting out for more than a century.

However, things will sound slightly different next season, as Notre Dame recently announced it has officially updated those lyrics to make them slightly more inclusive.

On Friday, the school—which was an all-male institution until the first female students enrolled in 1972—revealed the slight tweak it’s made to the last couple of lines, which have been updated to reflect the “sons and daughters” who now “march on to victory.”

Cheer, cheer for old Notre Dame,
Wake up the echoes cheering her name,
Send a volley cheer on high,
Shake down the thunder from the sky
What though the odds be great or small
Old Notre Dame will win over all,
While her loyal sons & DAUGHTERS
MARCH ON to victory pic.twitter.com/aheZD7cQt1

The Notre Dame fight song has new modified lyrics – highlighting the role that Women have played in the history and success of Notre Dame not only athletically, but academically. ☘️ pic.twitter.com/DL5Zrih8Q8

There are more than a few detractors out there who are absolutely irate over the “woke” nature of the new lyrics (despite the fact that they’ve been unofficially adopted by plenty of fans prior to this point), but most people seemed to get behind the change.

Good. I didn’t like the sons-only lyrics as a student and now as a father of two girls, it’s been weird teaching them the song that has just “sons” and not “daughters.”

The song was written 67 years before women were admitted to ND. It shouldn’t have taken 50 years to do this.

Maybe get less angry about a fight song lyric and get more angry about the fact that Notre Dame hasn’t developed a game-changing quarterback in over a decade.

I truly envy anyone who has so little else to care about in life that they have the energy to genuinely be angry about this.