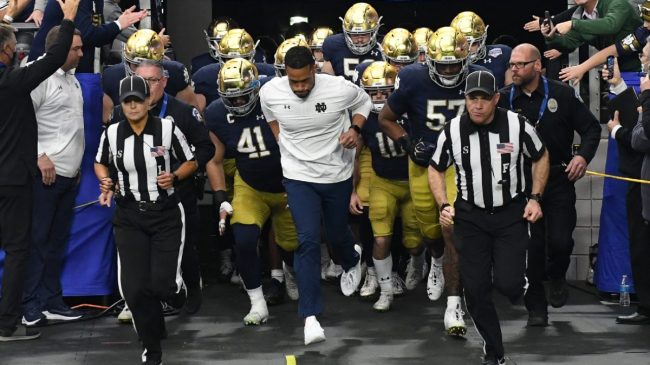 Notre Dame will make history in the 2023 college football season.

The Fighting Irish have schedule Tennessee State to the upcoming slate, marking the first time in school history that the program will face an FCS foe.

Prior to the announcement, the Irish had been one of just three schools to have never played FCS level competition. The other two are UCLA and Southern Cal. That streak will come to an end for Notre Dame in ’23, however, as they host the Tigers in South Bend.

The matchup will actually highlight two of college football’s up and coming African American head coaches, as Marcus Freeman will face off against former NFL legend Eddie George.

George took over for the 2021 season, leading the Tigers to a 5-6 record. Freeman will lead his first campaign in 2022 following the departure of Brian Kelly to LSU.

While the contest will feature that awesome coaching matchup, many Notre Dame fans are still upset with having to see the FCS streak die.

The group of programs to have never played an FCS foe is small. Soon, it will grow even smaller. Check out some of the angry reaction from the Fighting Irish Faithful below.

I believe this is a first for ND (FCS opponent). Schedule hasn’t looked the same in a LONG time.

For the first time in my lifetime; I will NOT be making plans around a ND game (tape/watch/attend)…I will ignore everything about this game. Not playing down (FCS) was as an important distinction as being Independent.

Wait so now USC has bragging rights on never scheduling an FCS are you serious right now? Schedule a directional MAC team but please no FCS, unless you want to drop down and play for a championship

We shouldn’t be playing FCS schools, we already get dragged through the mud for strength of schedule. Play a MAC or conference USA team ffs

ND is one of what, two, three schools to never have played an FCS team? This was a stupid game to put on the schedule.

this is horrible. ruining only playing FBS schools

Hey, ND peeps. USC tried to pull this a few years back. The outrage made them unschedule it. Unleash and don't let them do it!

What are we thinking here ND? This is a joke. Zero chance I even think about going to this game? You think I wanna spend $2k on plan tickets, hotels, food and tix for this…nope.

Nooooo! ND doesn't play FCS. Never have. Just one of only two FBS teams not to do so. Take pride in it. #GoIRISH!

Are you kidding me? It’s bad enough we have no chance to earn a 13th game with a conference championship and now you’re essentially playing 11 games in 2023? Good luck having any chance at the playoffs, looks like my fall is totally open in 2023 now.

NOTRE DAME SHOULD NOT SCHEDULE FCS TEAMS! Smh.
I don’t care if they are an HBCU or an Ivy League school. No place for this game on a Notre Dame schedule. This IMO is a step in the wrong direction.

I for one will probably put my Season Tickets up for sale that game. Sorry. Not worth traveling 4 hours for this game. Not happy about this.

There goes the never played an fcs school record

Jack is ruining the great tradition of not playing FCS schools. Just put Michigan back on the schedule!!!!!!

Great. Just great. An FCS school on a schedule where we already don’t have a championship weekend game. That was the one redeeming quality of our schedule- no FCS schools.

With Notre Dame having been an independent program for so long, they’ve had the ability to schedule as they wish. They’ve developed rivalries with teams like USC, Navy, Boston College, and Stanford, which don’t necessarily have geographical ties.

The move closer to the ACC has caused some issues in scheduling, though. And it appears as conference affiliation creeps closer, we may see some more of these FCS foes replace long standing rivalry matchups.