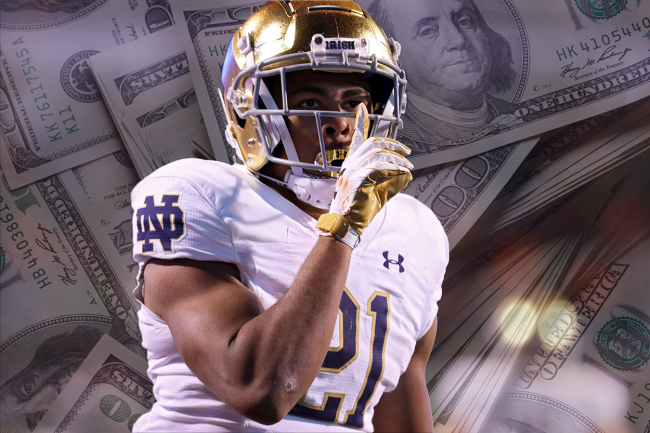 Notre Dame football is making history in 2023 by playing Tennessee State. It marks the first time ever that the Fighting Irish will play an FCS opponent and they are paying a lot of money to do so.

Earlier this month, the program announced that it had scheduled the Tigers for Sept. 2, 2023, which sent a lot of Notre Dame and college football fans into a tizzy. Because the Irish are not affiliated with a conference, they have historically scheduled all-FBS teams that gave them the best possible case for strength of schedule.

Not next year. For the first time in 134 years, Notre Dame will play an FCS opponent, which leaves just UCLA and USC as the two remaining schools to never have done so.

On Thursday afternoon, the finances to the agreement came to light in a report from The Tennessean. The Fighting Irish are set to pay Tennessee State $1,000,000 to travel to South Bend and (hopefully) lose.

Should that number be the reality, it is the largest payment that TSU has ever received for participating in a football game against an FBS opponent. The $1 million price tag is certainly on the high end of what FCS programs typically receive for playing FBS guarantee games.

And a Notre Dame win over Tennessee State is not necessarily “guaranteed.”

Former Heisman Trophy winner Eddie George took over as the head coach in Nashville last year. While the Tigers did not show a ton of improvement in year one, when they travel to Indiana, it will be year three.

There is a chance that George could get his program to a competitive level through recruiting and development by then. Notre Dame, although Marcus Freeman has his team in order and losing the first-ever FCS game would be embarrassing, could overlook the Tigers— especially coming off of a game in Ireland against Navy.

More than likely, the Irish will come out on top. But it might be closer than expected.

As for how much the Irish are paying for the game, it was more than the school had planned.

In response, George joked that the Irish can afford it.

“I look around here and y’all can make it happen,” George said. “Y’all are doing really well around here. This is a drop in the bucket.”

George is right. $1 million is less than Notre Dame has paid for opponents to travel to Indiana in the past and future, though they aren’t FCS schools.

The only way that this whole thing could get any better is if the Tigers roll into South Bend and beat Notre Dame on their home turf in their first-ever FCS buy game.