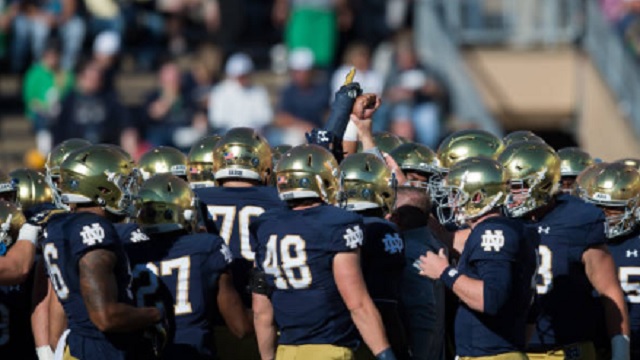 Earlier this week, while speaking to the press prior this weekend’s mega Notre Dame-Miami game that has college football playoff implications, Notre Dame coach Brian Kelly tried to downplay how much attention he’s paid to Miami’s awesome turnover chain

“They have created obviously some energy with their takeaway chain,” Notre Dame head coach Brian Kelly said on Tuesday. “I think that’s what it’s called. I hope I haven’t messed that up.

“I haven’t been paying real close attention to it, but I think they have used that collectively as a way to galvanize the group.

Kelly was obviously bullshitting because before tonight’s Miami-Notre Dame game his defensive coordinator Mike Elko went on a long expletive-filled rant ripping the turnover chain and hoping his team tries to show up the U’s defense.

“The turnover chain, The Miami defense and how they swarm and how great they are. I’m fucking sick of it.I’m sick of it, you go out tonight and show what this team is about. They can have the chain, we’re getting the fucking rings.”

Miami’s defense on the other hand is one of the nation’s most fordibable defenses and has forced 20 turnovers, 13 interceptions, and seven fumbles. The classic catholics vs convicts game is going to end up to if the Miami D can force a few turnovers and allow the turnover chain to make an appearance.