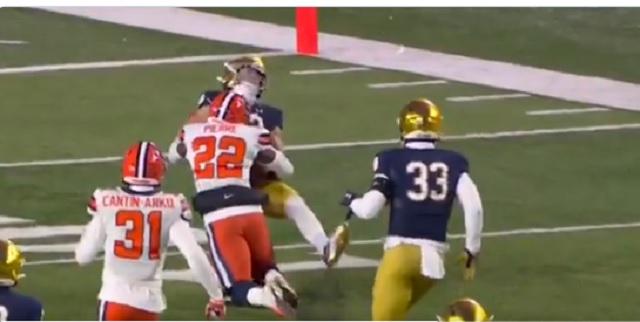 During Saturday afternoon’s Syracuse-Notre Dame game, Salerno bobbled a punt and got immediately crushed with a huge hit to the head by Orangemen Markenzy Pierre that led to the paint of the Notre Dame player’s helmet to shatter.

Pierre was ejected for targeting on the hit.

Markenzy Pierre is out for the rest of the game after a targeting call.

As for Salerno it seems like he’s ok as he instantly got up after the hit and was able to walk on his accord to the sidelines.

Matt Salerno walks off the field under his own power after a brutal hit to the head on what looked like a clear-cut targeting call by a Syracuse special teams player. Play under review.

Wow. That hit on Notre Dame punt returner Matt Salerno was about as nasty as it gets. It was clearly targeting on Syracuse, as Pierre drilled him directly in the middle of the facemark. That hit was violent. Kudos to Salerno for getting up and shaking that off the best he could.