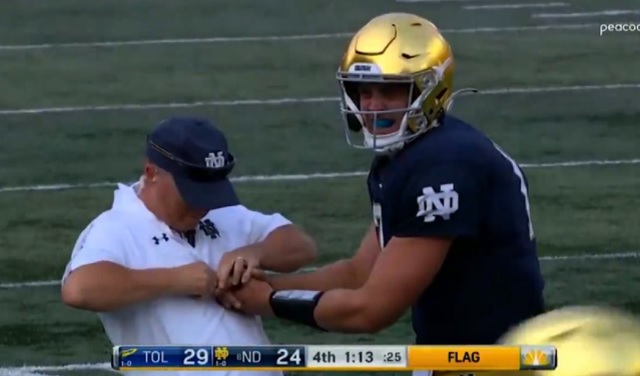 Notre Dame QB Jack Coan is as tough as they come.

Late in the fourth quarter during Notre Dame’s game against Toledo, Coan was leading the team’s two-minute drill while down five points. During the drive, Coan got hit in the hand and dislocated his finger. Coan immediately went to the sideline and got his finger popped back into place by the team’s trainer.

Coan just got his finger reset on the fly, nbd pic.twitter.com/OKi3ZvVgoc

Seconds later the Notre Dame QB went on to throw a game-winning touchdown against Toledo.

Fighting to the very end!@NDFootball back on top with one minute to play. #GoIrish pic.twitter.com/C67QcqO8Bf

College football fans loved Jack Coan’s determination at the end of the game.

Notre Dame QB Jack Coan dislocated his finger on that last TD drive, made the trainer put it back, and then ran it down Toledo's throat.

Jack Coan is a dawg!

This is what a leader looks like. Jack Coan was so determined to get this team a comeback win. What a gritty performance☘️ pic.twitter.com/KbhkIxaLUn