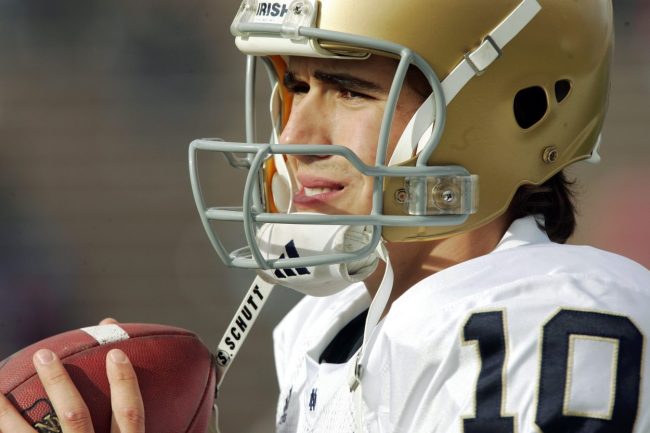 23-year-old rookie quarterback Ian Book made his first-career start on Sunday and it did not go well. He is just one of many former Notre Dame quarterbacks to struggle on the next level and history shows just terrible they have been over the last 20+ years.

Although it was not really Book’s fault because he was underprepared, missing a lot of players around him and under pressure on every snap all night, the Saints went 0-for-12 on third down and Book went 12-of-20 for 135 yards with two interceptions. New Orleans got smacked 20-3 by Miami and there was not a single positive takeaway.

There is a lot of time for Book to turn his career around, because it was literally his first start in his first year, but recent history would say that he is not destined for success.

Notre Dame quarterbacks have not fared well in the NFL. In fact, a Fighting Irish alumnus has not attempted a pass in the playoffs since 2006. And that player was a punter, not a quarterback.

In 2006, Colts punter Hunter Smith fumbled the snap then shoveled a pass to fellow Notre Damer Rocky Boiman for a 16-yard loss.

No Notre Dame alum has thrown a pass in the playoffs since. pic.twitter.com/JkrqyYdavF

Prior to Smith, the last Notre Dame player to attempt a forward pass in the NFL playoffs was Joe Montana with Kansas City in 1994. 27 years ago.

To make things worse, with Book’s loss on Monday, Notre Dame quarterbacks have lost a record amount of starts in the NFL. The number of consecutive losses is truly astonishing.

Here is Notre Dame’s quarterback track record in the NFL since 2000: