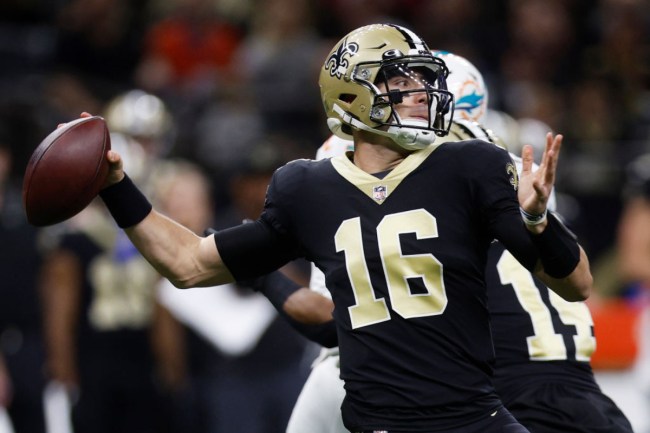 While Notre Dame fans of all ages have the luxury of hanging their hat on Joe Montana being a former Notre Dame quarterback, it hasn’t exactly been great in the QB department for the Irish as of late.

It’s been even worse when you look at Notre Dame QB’s in the NFL, especially following Quinn’s fallout in the league.

The latest example of former Notre Dame quarterbacks being flat-out bad in the NFL came on Monday night when Ian Book took the reigns for the Saints against the Dolphins. New Orleans had over 20 players in protocols, so Book wasn’t working with much, but his performance certainly wasn’t great in the 20-3 loss. Book finished the night with 135 yards passing and two abysmal interceptions.

Book’s loss was just another notch in the record books when it comes to Notre Dame QB’s losing in the NFL.

According to ESPN, Notre Dame quarterbacks have nos lost 23 straight starts in the NFL. You have to go all the way back to the 2012 season to Quinn beating the Panthers in Week 13 to find the last Fighting Irish win under center in the NFL.

An "oh my" stat from @ESPNStatsInfo: Notre Dame QBs have lost 23 straight starts in the NFL. The last win was by Brady Quinn in Week 13 of the 2012 season vs the Panthers.

There are only so many quarterbacks in the NFL, but that is a truly remarkable stat given the prestige that Notre Dame carries itself with.