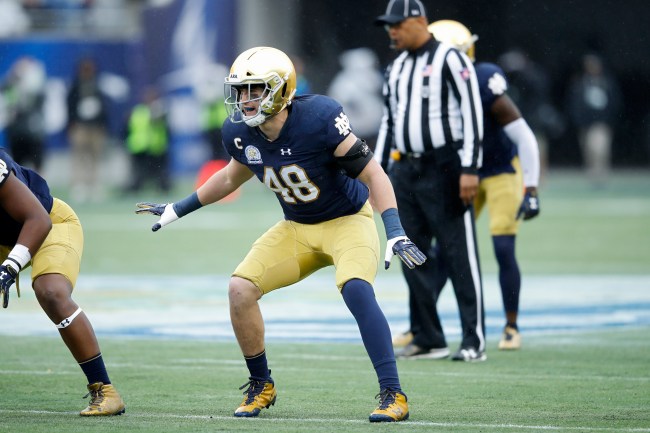 Notre Dame Will Wear Non-Gold Helmets For The First Time Since The 1940s In November’s ‘Shamrock Series’I was one of those insufferable “Notre Dame’s uniforms are steeped in tradition and should forever remain unchanged! RUDY! RUDY!” guys until I bought a flight to South Bend to see what the fuss was all about. I kid you not when I say it was the most disappointing football experiences of my entire life–top to bottom.

I would comment on the tailgating but there literally was none. I walked around to a few different bars recommended by its tight-assed students and ended up at this half-empty bar that resembled an over-sized Chili’s. Just outside, a MySpace country band was playing on the street, which had been shut down for a party that never came.

I drank myself stupid at Chili’s 2.0, puked in a porta-potty on the way into the stadium, and sat through two hours of uninspired football in a stadium with the energy of a funeral. Rudy wasn’t only offsides but he lied to me. And for that, I will never forgive him.

So screw tradition. Burn the history books. Smash the gold helmets (even though they are aesthetically beautiful and I love them).

On Thursday morning, the Fighting Irish revealed their latest Shamrock Series uniforms from Under Armour that they’ll wear against Syracuse in Yankee Stadium on November 17th.

According to SB Nation, the last time Notre Dame wore non-gold helmets in a game was around the ‘40s, when the helmets were still made of leather.

The cursive Notre Dame on the chest of the jersey matches the cursive Yankees font.#GoIrish ☘️ #ShamrockSeries pic.twitter.com/9wXxQnxsTj

Pinstripes on both the sleeves, gloves and pants replicate the iconic @Yankees pinstripes that have been worn for over 100 years by the Bronx Bombers. #GoIrish ☘️ #ShamrockSeries pic.twitter.com/CzuivKjJMA

The Fighting Irish.
The @Yankees.

They will anger Fighting Irish fans who also happen to root for the Red Sox. Lets not forget that in 2015, Notre Dame played at Fenway Park in 2015 and wore all-green “Green Monster” uniforms.

I don’t hate the unis as much as some peeps on Twitter.

What you guys think?