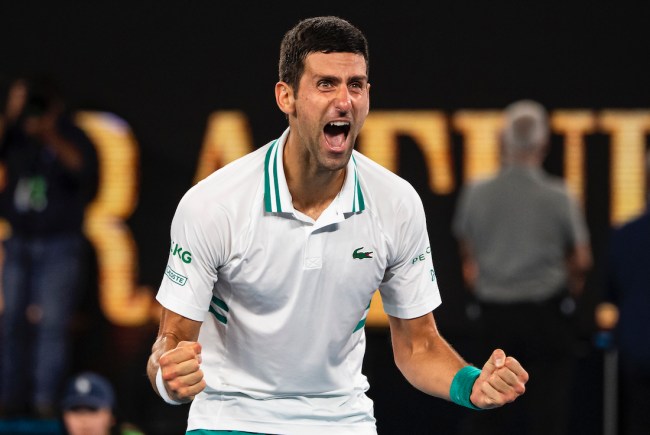 Novak Djokovic is one of the best tennis players ever, with the 33-year-old having won 18 Grand Slam men’s singles titles — which includes an insane nine Australian Open wins — and also earning the most prize money ever with $147,744,252. So, to say that the Serbian is an icon around the world would be a bit of an understatement.

While plenty of people admire Djokovic, there are some who would love to see the guy be brought down. And, according to an Instagram model named Natalija Scekic, she was offered a $70,000 payout by someone who is in that camp, hoping that Natalija’s good looks (seen below) could lead to Novak Djokovic falling for her plot in the hopes of ending his marriage.

Per the New York Post, Scekic said she was contacted to attend what she believed was a business meeting. Instead, she claims she was asked to try and get Djokovic into the bedroom, film the two having sex with a hidden camera, and expose him to ruin his marriage, stain his image and, possibly, interrupt his career.

Opening up to a European magazine called Svet&Scandal, Natalija Scekic revealed details of the apparent meeting she attended, which was all aimed at extorting Novak Djokovic. Take a look below at some of the reported plot.

“It is true that a guy contacted me. I know him from the city [of London] and I considered him a serious guy,” Natalija Scekic said.

“I am familiar with their work and they were good. When he asked me for a date, I thought it was for a business matter. However, as the conversation progressed, I saw that it had nothing to do with my life.”

The model could not believe the reason for the encounter, even believing that it was a joke.

“I thought it was a hidden camera when he told me that I had to seduce Novak and film it, but not to worry about that because he was already taking care of that,” Natalija Scekic continued.

“He told me I could get about 60,000 euros for that and a trip wherever I wanted. I laughed, expecting him to say it was a joke, but the man was very serious. I felt very offended and humiliated.”

As one would expect, Natalija wasn’t exactly thrilled with the proposed opportunity, saying above how humiliated she was to even be asked to take part in extorting Djokovic. She was so furious that she even thought about throwing water on the man she was meeting with and storming out.

“At that moment I thought of hitting him, throwing water on him, but I restrained myself because we were in a public place,” she noted.

“I gathered my things and left. I hope he didn’t find a girl who wants to do that, because it’s not fair to Novak. He is our best ambassador, an exemplary man, a family man. For someone to seduce him like that for money, or at least try to…”

Assuming this is true, and there’s no reason not to think it is, good on Natalija Scekic for refusing to take the bait and put herself in an uncomfortable position. Rather than get an easy payout, she stuck to her morals and made sure she didn’t get involved. That’s actually pretty awesome — especially in today’s world, where some people would do things like this just to make a name for themselves.

Novak Djokovic and his wife Jelena have been married since 2014, and have two kids together. There were divorce rumors floating around at one point a couple years ago — with reported allegations of the tennis star cheating — but, since then, the reports have seemed to evaporate over time. Hopefully there aren’t any other extortion plots being drawn up from other people who are trying to get Instagram models to ruin him.