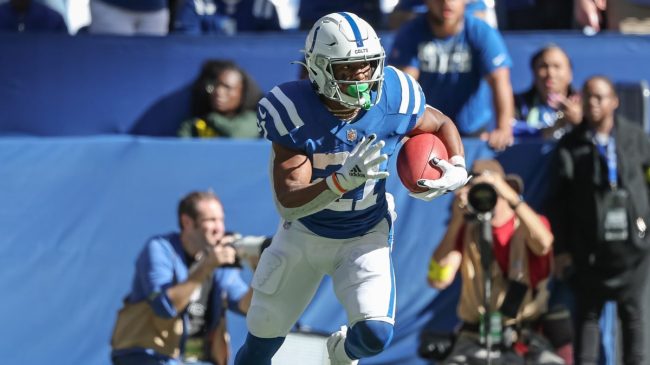 With Indianapolis Colts’ superstar running back Jonathan Taylor out injury, backups Nyheim Hines and Phillip Lindsay were expected to share the load.

Hines, a fifth-year back out of North Carolina State, got the start for Indianapolis. After an early drop, he caught a pass from Matt Ryan on third down and was tackled short of the sticks.

But after the play, Hines came up wobbly. He tried to walk off the field, but immediately staggered and needed to be supported by his teammates.

Frightening scene with Nyheim Hines after taking a big hitpic.twitter.com/dUA2weN470

The frightening scene immediately sent football fans flashing back to the scary injury suffered by Miami Dolphins quarterback Tua Tagovailoa just a week ago. Fans crushed the Dolphins for clearing Tagovailoa to play. The third-year QB suffered a similar injury just days prior against the Buffalo Bills.

#ThursdayNightFootball For goodness sake after seeing Tua last week. Please keep Nyheim Hines out and taking it easy. For his health. Don’t play him at least tonight.

Hope the NFL learned a lesson from Tua Tagovailoa and Nyheim Hines is ruled out immediately.

Good to see Nyheim Hines walk off the field under his own power, but hopefully the Colts rule him out of the game. That was eerie similar to how Tua Tagovailoa got up against Buffalo.

The message from fans across the league was simple: do not let Hines back in the game.

Nyheim Hines is wobbly after getting hit hard.

This shouldn't be hard: Don't let him back in.

I really hope they don’t let Nyheim Hines back in the game. Protect him please 🙏🏽 pic.twitter.com/1BARqnx7Fy

Please don’t let Hines back in this game.

The scary incident is just another reminder of how dangerous the game can be.