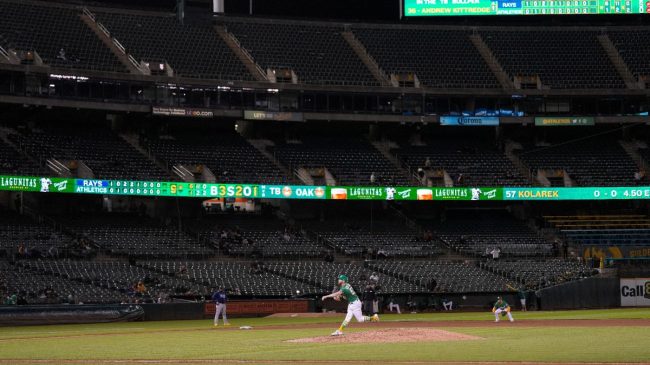 Things have gotten bad in Oakland. The stadium is so empty that fans can do pretty much anything they want while attending an A’s game.

And when I say anything, I mean ANYTHING.

Oakland took on Seattle in Sunday afternoon action, and an A’s couple was filmed appearing to be in the midst of a lewd act. Sitting in the very top row of the Coliseum, there was no one within 20 rows of the raunchy duo.

It seems like they were there for anything but baseball, but there have to be better spots for that type of action than baking in the California sun in the upper deck of a three-quarters empty stadium.

But maybe this guy likes an audience, though maybe Oakland isn’t the best location for that either.

The reaction on social media was wild.

Fans react to seeing couple at the Oakland A’s game

Fans were quick to respond to seeing the couple at the Oakland A’s game. Check out the hilarious reaction on Twitter.

Deserve a phat amount of likes for that one

Middle of the damn day too.

And of course, fans were quick to point out the completely empty deck for yet another A’s game.

What an unexpected scene.

The couple missed an impressive Oakland win as the A’s broke an 81-game streak where they hadn’t hit a triple. These two were busy enjoying a different kind of action. We should be hearing about that move to Las Vegas any minute now.