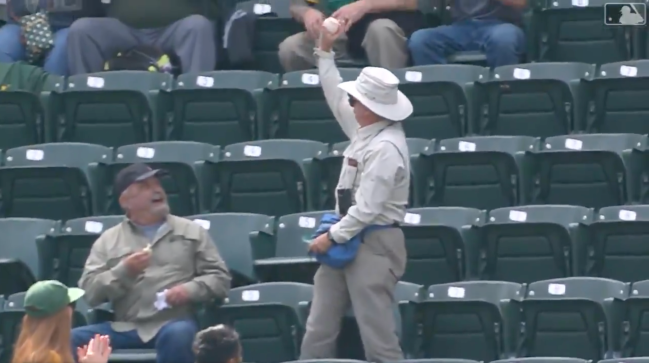 No matter how young or how old, there are few thrills like catching a foul ball at a baseball game. That notion was certainly on display on Thursday afternoon as the Oakland played host to the Chicago White Sox for a little day game action.

During the bottom of the first inning, A’s second baseman Josh Harrison stepped into the box as the leadoff hitter. He took the first pitch for a strike and then poked an 0-1 offering foul down the first base line.

The foul ball didn’t quite go beyond first base, but it didn’t go back behind the backstop. Instead, it headed right toward an A’s fan in the upper deck who was dressed in khaki from head to toe like it was time for a safari— fishing hat, binoculars and all.

Only a little bit of color was coming from a fanny pack around the fan’s waist. As it would turn out, that fanny pack was crucial.

The fan completely missed the catch but the fanny pack came in clutch to make for a viral moment that saved the A’s fan from an embarrassing drop. The ball fell through out-stretched arms and plopped right into the fanny pack.

if you were on the fence about getting a fanny pack, here’s your sign. pic.twitter.com/i2iQjv1bd1

Everything about the sequence is amazing. From the safari-esque/fishing trip outfit, to the man on the left absolutely devouring what appears to be a hot dog, to the look of pure joy and shock on the fan’s face. Simply incredible ball placement from Harrison too, a direct shot like that has to be intentional, right?