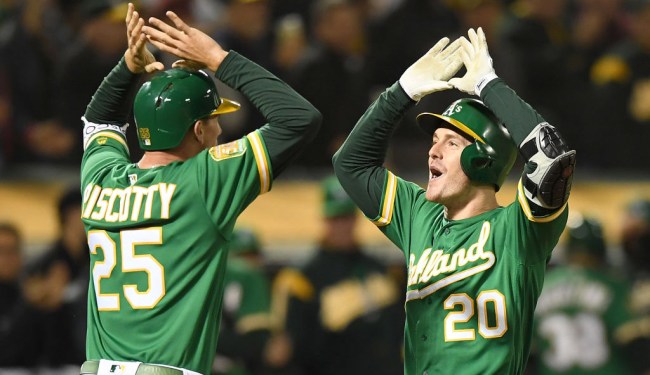 The Oakland A’s have needed a new baseball stadium since, well, since the day they moved to the Bay from Kansas City back in 1968. And now, 50 years later, it appears the Athletics will finally be getting what they need.

That’s because on Wednesday, the team revealed its plans to build a new baseball stadium in the downtown area of the city that will be similar in nature to the baseball parks currently located in Chicago (Wrigley Field), San Diego (Petco Field), and Pittsburgh (PNC Park).

💥 here it is: our plan to build a new ballpark at Howard Terminal.https://t.co/vLuiX01aT0#RootedInOakland pic.twitter.com/HtI7zEhrfV

The park, to be located at the Howard Terminal site will seat approximately 34,000 people – the smallest capacity stadium in Major League Baseball and a far cry from having to tarp over numerous sections of the third deck in the decrepit Oakland–Alameda County Coliseum which can seat, under certain configurations, up to 63,000 fans.

Back in the late 1970s, Louisiana Superdome officials tried to lure the A’s to New Orleans, but the A’s were unable to break their lease.

In 2006, it was widely reported that the A’s would be moving to a new 32,000-seat, baseball-only facility in Fremont, located 25 miles south of Oakland, which was to be called Cisco Field. That deal fell through in 2009.

San Jose then tried to lure the A’s in 2009 and ended up suing MLB when then-commissioner Bud Selig prevented the team from moving into the San Francisco Giants’ territory. Litigation ran all the way to the United States Supreme Court where the move was rejected in 2015.

And as recently as 2017, the A’s had a plan to build a new 35,000 seat stadium near Laney College, but that only lasted three months before college officals ceased negotiations.

Now, this new facility, which appears to be going full-steam ahead, finally, will feature a jewel box design “like nothing you have ever seen,” stated A’s president Dave Kaval.

"We are also committed to delivering a baseball experience for our fans like no other. Our proposed two-project approach will enable us to deliver on our promises to both our fans and community.” – @DaveKaval. For more information, visit https://t.co/vLuiX01aT0#RootedInOakland pic.twitter.com/HSqZX7DlH8

According to the Mercury News…

A 2023 opening is being targeted for the new stadium, which would have a capacity of about 34,000. The team plans to break ground on the project in 2020, Kaval said at a news conference Wednesday.

Kaval also said the team is committed to privately financing the stadium but did not specify how much the project is expected to cost, saying it is too early to determine that. In writing for this news organization in September, sports consultant and former A’s executive Andy Dolich described the construction of the new ballpark as a “$600 million” project, although that was not tied to this particular proposal.

Kaval said they would have a better idea of the cost after they finish the environmental impact review at the Howard Terminal site, which is expected to start this week and last about a year.

“This design will allow us to blur the boundaries of a traditional ballpark and integrate into the surrounding neighborhood,” he said in a team news release, which referred to the stadium as “a ballpark within a park … nestled carefully into its urban surroundings.”

As part of the project, the A’s also propose to turn the current Coliseum site into a tech and housing hub, preserving Oracle Arena and reducing the Coliseum to a low-rise sports park as San Francisco did with Kezar Stadium.

“We plan to redevelop the Coliseum to help that site realize its full potential for the residents of Oakland for the long-term,” Kaval said.

With the Raiders moving to Las Vegas and the Warriors exiting Oakland for a new arena in San Francisco, the A’s will soon become the main sports draw in the city, making this appear to be the perfect time for them to move into a sparkling new stadium.

Join us as @DaveKaval and Mayor @LibbySchaaf discuss the A’s plan to build a new ballpark. https://t.co/2AAE9GSDG5