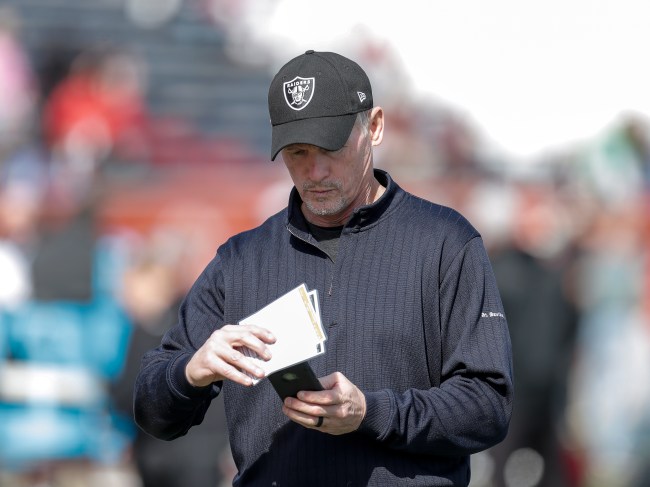 The Oakland Raiders just added linebacker Vontaze Burfict after the talented but erratic player was released by the Cincinnati Bengals, and the signing has already created some mini awkwardness. Why? Well, Burfict was the player who once tried to decapitate new current teammate Antonio Brown a couple of years ago during a game, which meant the two players had to make up and play nice after both joined the Raiders.

That’s all good and well, but there’s another person who might need to talk with Burfict to clear the air a little bit, too; and that’d be Raiders general manager Mike Mayock. That’s because, back when Mayock was working as an NFL Draft analyst for the NFL Network — which he did up until recently taking the front office gig with the Oakland Raiders — he completely trashed Vontaze Burfict when the dude was coming out of college. Just take a look at some of the unkind things Mayock had to say about the linebacker’s game in 2012.

“I put his tape on with absolutely zero preconceived notions,” Mayock said in a conference call with the media in the days before the 2012 draft. “I watched three tapes and really didn’t like him as a football player. . . . I think he’s a non-draftable kid. For me, he’s a free agent.”

Welcome to the Oakland Raiders, Vontaze, where your new GM truly believes in your abilities.

Of course, Mike Mayock wasn’t wrong in his assessment, as Burfict did go undrafted due to a terrible NFL Combine, Pro Day and lots of questions about his character. But, here’s the thing, since joining the league, there are still a lot of those same questions floating around, as the linebacker has been inconsistent throughout his NFL career and has missed a bunch of games due to suspensions, so it’s interesting that Mayock would take a gamble on him now.

Something tells me these two guys had to smooth things out a little bit prior to Burfict signing with the team. But, given all the awkwardness between the linebacker and his GM, and the linebacker and Antonio Brown, can we just go ahead and guarantee the Oakland Raiders are going to be on HBO’s Hard Knocks this summer? So. Much. Drama.