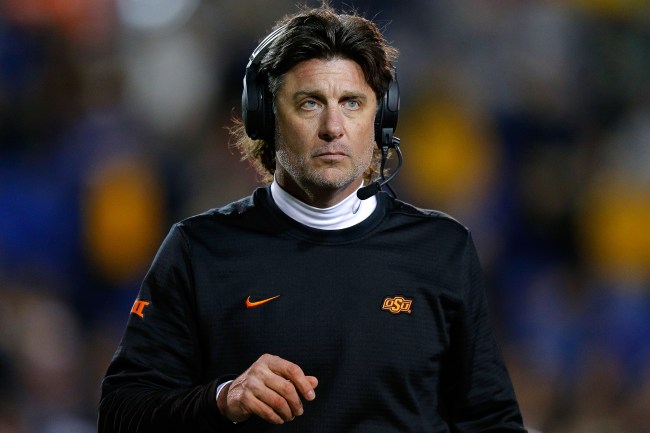 OAN reporter and chief White House Correspondent Chanel Rion wore an Oklahoma State University t-shirt while covering President Donald Trump’s rally in Tulsa on Saturday as a message to Cowboys head coach Mike Gundy who distanced himself from the network earlier in the week.

On Tuesday, Gundy apologized for the “pain and discomfort” he caused his players and others when he was photographed wearing a T-shirt from conservative news site OAN (One America News), which has been extremely critical of the Black Lives Matter movement.

The apology came a day after star running back Chuba Hubbard took to social media to call out Gundy for wearing the shirt.

I will not stand for this.. This is completely insensitive to everything going on in society, and it’s unacceptable. I will not be doing anything with Oklahoma State until things CHANGE. https://t.co/psxPn4Khoq

“I had a great meeting with our team today. Our players expressed their feelings as individuals and as team members,” Gundy said. “They helped me see through their eyes how the T-shirt affected their hearts. Once I learned how that network felt about Black Lives Matter, I was disgusted and knew it was completely unacceptable to me.

“I want to apologize to all members of our team, former players and their families for the pain and discomfort that has been caused over the last two days. Black Lives Matters to me. Our players matter to me.

On Saturday Rion trolled Gundy by wearing an OSU shirt and challenged the Oklahoma State coach to have a sit down with her for bashing OAN in his apology video.

Ready for the Presidential rally in Tulsa, OK – @OANN T-shirts going fast in the home of @okstate! pic.twitter.com/F1UrdoHv1n

More from @ChanelRion. She would like to have a sit down with the team. #okstate pic.twitter.com/mZ7zsNxDKU

You and your team called my network “disgusting” – millions of Americans would like to understand why.

I propose a round table civil discourse with you and your team on @OANN.

It’s highly unlikely Gundy or any of his players would have a sit down interview with OAN after the immense amount of controversy that went down this week.