Odell Beckham Jr. Reportedly Open To Returning To The Browns With Baker Mayfield On His Way Out 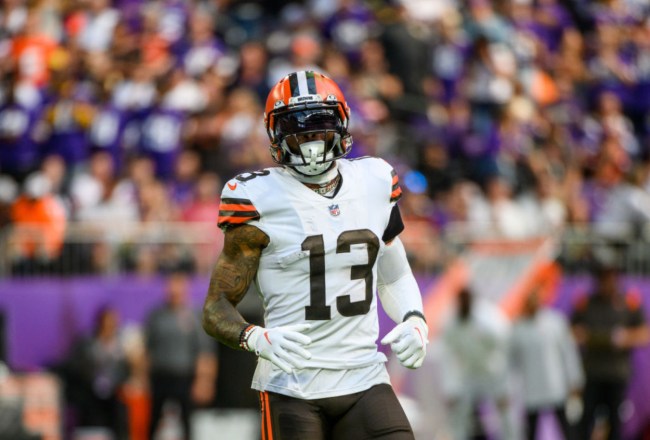 The Cleveland Browns and Odell Beckham Jr. didn’t exactly part ways on the greatest of terms. It was no secret that the wideout, and people in his camp, didn’t see eye-to-eye with Baker Mayfield, but with the QB on his was out the door and OBJ a free agent, a return to Cleveland isn’t outside the realm of possibilities.

OBJ proved that he’s still a highly capable wide receiver after being traded to the Los Angeles Rams last season. With that being said, he’s coming off of a torn ACL he suffered in the Super Bowl, which raises plenty of questions regarding his worth in the market.

The Browns could be looking for weapons on the outside for Deshaun Watson. When the idea of returning to Cleveland was offered to OBJ on Twitter he didn’t exactly say he was interested, but he also didn’t say “no.”

Lol that’s an interesting one

According to Browns beat reporter Mary Kay Cabot, Beckham Jr. is open to the possibility of rejoining his former team.

“A source told cleveland.com that Beckham is open to the possibility because he loved his teammates and Browns fans, and only left when things reached the point of no return with Baker Mayfield.”

The Drama That Led To The End Of OBJ In Cleveland

OBJ landing with the Browns would be a surprise given how horribly things ended in Cleveland.

Back in November of 2021, Beckham Jr.’s father shared an 11-minute video titled “Odell Beckham Is Always Open For The Cleveland Browns” showing how little Mayfield targeted his son.

OBJ and Mayfield were not anywhere close to being on the same page last season, but with Mayfield on his way out and a new QB in the fold maybe Beckham Jr. could find his footing in Cleveland yet again.