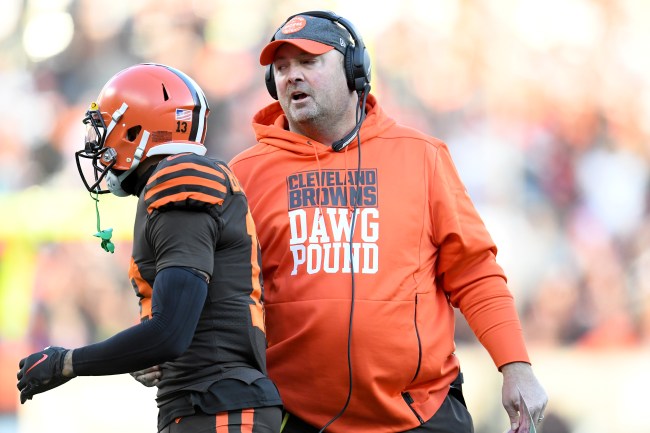 The Browns are dead. Odell Beckman has the same number of touchdowns (3) in 15 games this season than he did in just four games in 2017. Freddie Kitchens must’ve just ate a bean burrito and boarded an intercontinental flight because his seat is HOT.

If you were to tell me before the Browns playoff-chance-blowing 31-15 loss to Ravens on Sunday that Odell would have himself a passionate sidelines exchange with Freddie K, I would yell in your face “Thanks, Captain Obvious!” and everyone would laugh and I’d have consenting intercourse with all the females.

Odell dressing down Kitchens during in the Browns final gasp would be great strategic move for OBJ because it would be a symbolic representation of the narrative that is in Odell’s best interest: “Freddie Kitchens is incompetent and overweight so let that distract you from the fact that, even despite the organization’s systematic failure, I simply haven’t been playing as well as everyone hoped.” Don’t know why Hypothetical Odell would bring up Kitchens’ weight; kinda fucked up.

But, according to Beckham himself, the impetus for his blowup during the fourth quarter wasn’t because of Kitchens. It was–and stop me if you’ve heard this before–because of the inept NFL referees.

According to the New York Post, Beckham told reporters his outburst came from officials warning him after a touchdown celebration that one more personal foul would lead to him being ejected, as he was already flagged for taunting in the first quarter.

This was Odell's first touchdown in almost a month 😳

Many, such as I, do not believe this tall tale.

I think Odell was livid about Kitchens’ play call on the following two-point conversion attempt, where he evidently believed that Ricky Seals-Jones was a better option with the game on the line than him.

"No, no, no no see that is RICKY SEALS JONES M—-F—-ER and I am ODELL BECKHAM." (what I imagine OBJ saying) pic.twitter.com/ZXocArenvu

Do you guys hear that? It’s the army of NFL reporters riding in on horseback with their “anonymous” sources salivating to reveal some bullshit story about how Odell pours a bowl of chicken soup on Kitchens’ head every day in the team cafeteria and yelling “O’Dell Rules!”