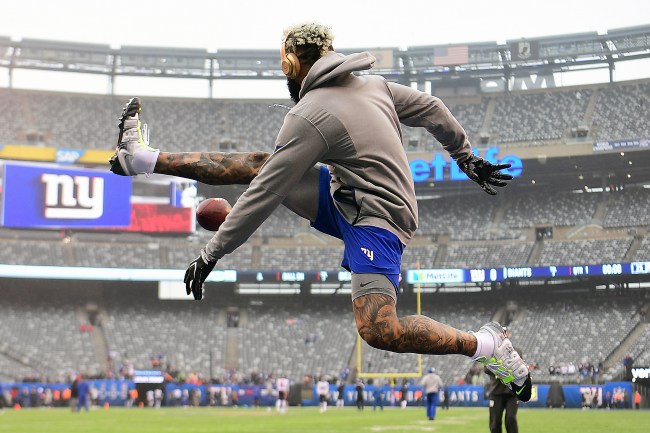 Odell Beckham Jr. is fully embracing his new status as a Cleveland Brown (See here, here, and here), despite Colin Cowherd claiming that a source told him that Odell is not enjoying being in Cleveland. But the 26-year-old Pro Bowler seems to be excited to reunite with his best friend and college teammate Jarvis Landry, a weapon who requires the attention of defenses, which will undoubtedly open things up for Odell to shine.

Football aside, I can’t imagine someone as flashy as Odell is super pumped to be uprooted from the most electric city in the world and plopped down in Cleveland, but if his Instagram account is any indication, Beckham is ready to immerse himself in the Rock and Roll capital of the world.

Beckham posted to his IG account an energetic hype video featuring him, Mayfield, and Landry accompanied with the caption: “finally get to be off my leash.”

Beckham’s leash comment likely has a double meaning. He could be alluding to Cleveland’s Dawg Pound and also referring to his new franchise using him in a more productive manner.

Odell said in an ESPN interview back in October of 2018 when the Giants were in a world of hurt:

“I haven’t been in the place where I felt like I could really go out and do everything that I’m capable of doing,” Beckham said. “I don’t get 20 targets like some other receivers, you know.

“I feel like in the past five years, they found a way to run a Cover 2, keep everything in front, and that’s how they played me. And there’s no way to — how do we beat this? I feel like I’m being out-schemed, and then I also don’t have a chance to, like, do something where I’ve got to take a slant and go 60. And not to say that’s not fun, but it’s like I want some easy touchdowns too. I watch everybody across the league. All the top receivers get the ball the way that they, you know, should. And if they don’t, they say something about it.”

It’s a damn shame that the Browns don’t play the Giants this season.