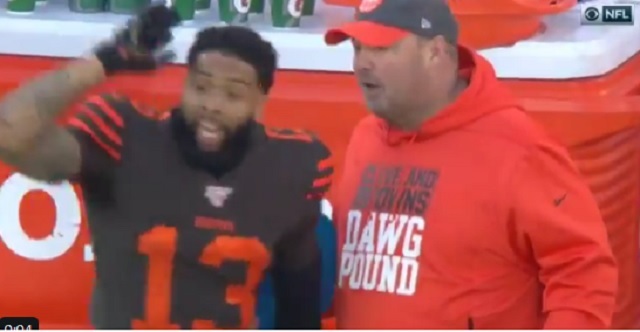 It seems like Browns players are fed up with head coach Freddie Kitchens.

In the fourth quarter of today’s Ravens-Browns game, Browns star wide receiver Odell Beckham Jr. could be seen getting animated with Kitchens on the sideline.

Odell Beckham going off on Freddie Kitchens a week after Jarvis Landry went off on him.

Odell is not happy pic.twitter.com/3LAKblcVNt

Beckham’s frustration with Kitchens comes a week after Jarvis Landry yelled at the coach on the sidelines.

Jarvis Landry gets in Freddie Kitchens face and tells him "that's f***** up"pic.twitter.com/TkAfTdzRLW

The Browns front office has been adamant that they intend on keeping Kitchens for next season.

Sources say Browns management continues to stand with Kitchens and wants him to continue to have the success necessary to remain in that position for a long time. As the end of the regular season looms, the speculation about job security is at its peak.

But as of right now, barring a horrific collapse or circumstance to end the season, it appears the Browns will be moving forward with Kitchens.

The organization will evaluate everything, but that is the direction it’s heading.

At this point it would be surprising if the team would bring back Kitchens next season considering how players have snapped at him in the past few weeks.