Odell Beckham Jr. Was Late To Kid’s Event After Being Spotted In Coachella Partying With Amber Rose 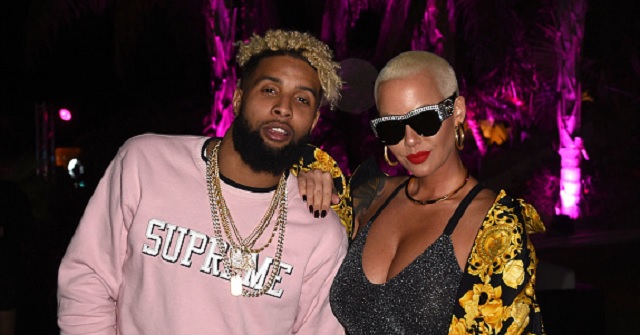 Odell Beckham Jr. is never going to live down the “Miami party yacht” controversy from last season but it appears that he hasn’t learned his lesson and continues to be immature off the field.

Today, the New York Post wrote a scathing piece criticizing Beckham for arriving late to a kid’s event in New York after he was seen partying it up with rumored girlfriend Amber Rose at Coachella.

Sadly for Giants fans who are hoping for a more mature and responsible Odell Beckham Jr. in 2017, he was up to some familiar immature acts on Monday, showing up more than an hour-and-a-half late to a community event for kids at MetLife Stadium, spending minimal time there before whisking himself into a shiny black SUV waiting like he was some sort of diva rock star trying to avoid his adoring masses.

It’s the fact that — according to two sources with knowledge of the situation who spoke to The Post on the condition of anonymity — Beckham was late because he missed his red-eye flight Sunday out of California, where he was attending the Coachella Music Festival, forcing the sponsor of the event, Dunkin’ Donuts, to scramble to arrange another flight for him on Monday.

Beckham, who was paid to make the appearance, was scheduled to be there from 5:30 p.m. to 7:30 p.m. to conduct an “exclusive football clinic” for the Van Cortlandt Park Titans and then partake in a “post-event celebration” with the kids and their parents.

While I think the post is being a bit dramatic being late to a kid’s event that was probably planned and organized for months because you’re getting boozed up at Coachella is not acceptable.