OBJ Makes Insane Catch While Getting Pulled Down Against Redskins, Showed Up To Game In A Mask 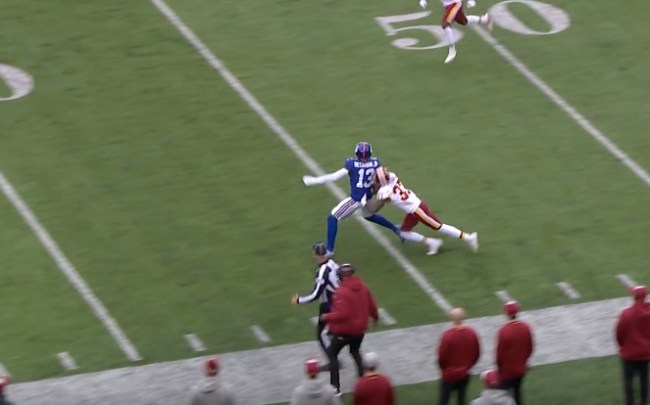 Odell Beckham Jr. was turning heads this morning when he showed up to The Meadowlands ahead of the Giants’ game against division rival Washington Redskins. He’s always a sharp dresser and flashy dude, a bro that draws attention wherever he goes, but this was different.

When Odell Beckham Jr. showed up to the stadium he figured today was as good a day as any to bust out his creepy ass Halloween mask. He wasn’t exactly alone in dressing up for today’s game in a Halloween theme. Tyreek Hill showed up to his game in a sumo wrestler suit and a Chicago Bears player showed up dressed as Mike Ditka. But OBJ’s mask is creepy AF.

I can’t really tell what the mask is because it’s out of focus and he’s walking quickly but it appears to be like a wooden version of the mask from Jim Carrey’s The Mask from back in the 90s, or something similar. Regardless of what this mask is, it was ominous for OBJ’s performance on the field.

Odell, is that you? Or a stunt double?

Not to be outdone, Odell Beckham Jr. just showed up in some sort of mask. #Giants pic.twitter.com/fdEFwHxoxN

After turning heads for showing up in that weird ass mask OBJ took the practice field with a pair of Nike cleats with over 100 swoosh marks on them which could be a not-too-subtle nod to the ridiculously enormous $95 million contract he signed in the offseason.

Pregame Cleats for @obj have more than 100 Nike swooshes. pic.twitter.com/YzvNrGnJPV

About that catch. Odell Beckham pulled in a 44-yard pass while getting pulled down and somehow managed to keep control of the ball. After Odell made this catch, naturally, Twitter went nuts.

Honestly, why ISN’T Eli going deep to OBJ on 33% of plays if he wants to keep his job for the entire season?

The Giants are an embarrassment, but he is uniquely talented.

And no points out of it as usual!!

There were a whole lot of Eli Manning white knights out there after this catch too, despite the throw being in a spot that caused the receiver to be falling to the ground while getting fouled.

And they say he has an inability to throw deep. Look what happens when he has time. He’s not done he’s got years left. #GiantsPride

How about What a Throw as well. It was on the money! #Eli. Remember who got you here! #Giants

Let’s not get carried away here. Eli’s been complete trash this entire season. OBJ had to make a superhuman play to hold onto the ball and the Giants didn’t even get any points out of it because Eli couldn’t get the job done.