Odell Beckham Jr. ‘Frustrated’ With Lack Of Targets And Wants ‘More On My Plate’ To Help Struggling Baker Mayfield 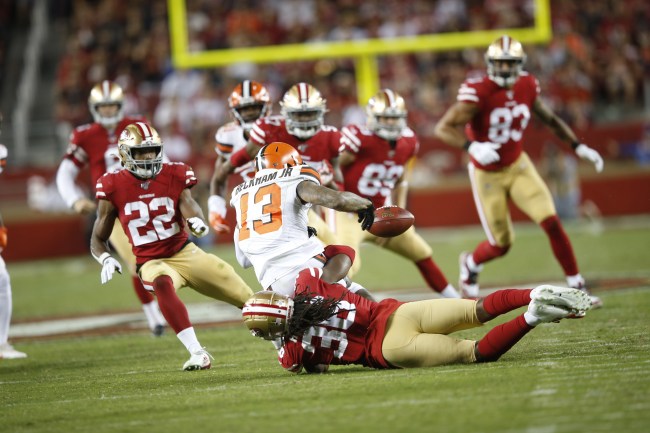 The Cleveland Browns are one embarrassing loss away from full-on crisis mode, which typically consists of passive aggressive social media activity from players and a 2,000-word exposé about festering locker room turmoil citing ‘sources close to the organization.’

The Browns are 2-3 and beginning to realize that having arguably the best receiving tandem in the league is far from a cheat code. Odell Beckham Jr.’s targets have dropped every week since Week 1 (11, 10, 9, 7, 6), but that means nothing when Baker Mayfield’s most recent passer rating (13.4) in the 31-3 blowout loss to the 49ers was the lowest in the NFL thus far this season with a minimum of 10 attempts.

Through five games, Odell has just 23 receptions for 335 receiving yards and one touchdown, with the past two games catching just four passes and under 50 yards.

Chase Winovich has as many touchdowns this season as Odell Beckham, Jr.

The Browns will take on the 4-1 Seahawks this Sunday, and at Browns practice on Thursday, the All Pro receiver expressed his frustration with his lack of contribution, but was cognizant of not pointing fingers.

#Browns Odell Beckham Jr admits he gets frustrated when he can’t contribute in a loss pic.twitter.com/wAUMGagPAX

“Anytime we lose, and I don’t feel like I did anything to help win the game, I’m gonna be frustrated,” Beckham said. “It’s just the bottom line. I’m a winner in my heart, and I hate losing.”

Odell also expressed he can shoulder much more responsibility to make life easier for the mightily struggling Baker Mayfield.

“I’m not calling plays or designing anything,’’ Landry said Thursday, per Cleveland.com. “But at the end of the day, obviously he’s a key part of our offense whether the ball’s in his hands or not. The way that it’s been going, we haven’t really been making enough plays without him touching the ball.”

I’m no expert analyst or nothin, but when your quarterback’s latest passer rating would have been three times better if he spiked the ball every play, he deserves a lion’s share of the blame too.