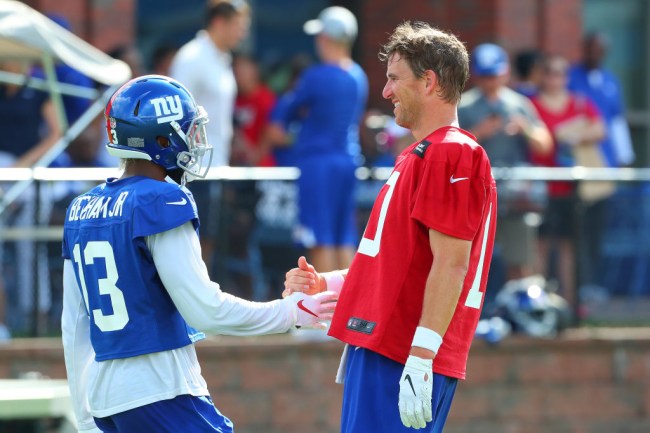 Eli Manning seems and looks like a low-key funny guy. Maybe he’s not the kind of person that’s going to make an entire locker room laugh with some hilarious story, but definitely someone that can get a laugh out of some people.

Now, just like anyone else, if you get a few beers in him or in front of a flip cup table he probably gets funnier and funnier, but it turns out he’s not too bad a prankster either.

As Manning very well could be putting on a Giants jersey for one last time this weekend, Dan Duggan of The Athletic spoke with Odell Beckham Jr. to reminisce a bit about their playing days together and the wide out recalled a classic Manning story.

The prank involves Manning acting like he just got his wisdom teeth taken out, asking to see the wisdom teeth of rookies on the team and a handful of turf pellets; it sounds very on-brand for Manning.

“He’d do it almost every year. He’d be around the rookies after practice and he’d start rubbing his cheek. He’d make this face like he was in pain and he’d tell them he had a toothache. He’d press down on his cheek and move his jaw like he was in serious pain. He’d be like ‘Oh, man, I just got my wisdom teeth pulled not long ago. That [expletive] is hurting. Do you ever hurt like that in your mouth? That’s painful [expletive].’

“So he’d ask a guy if he had his wisdom teeth still. And of course the rookies would, like, open wide and try to show him. And he’d take his other hand and shove the pellets from the artificial turf in their mouths.

It’s a very football-guy, no real harm prank to pull, but I’m sure it is pretty hilarious to see all of these rookies with their mouths open because their two-time Super Bowl MVP quarterback told them to do so.

Just play forever, Eli, the football world is going to miss you too much.