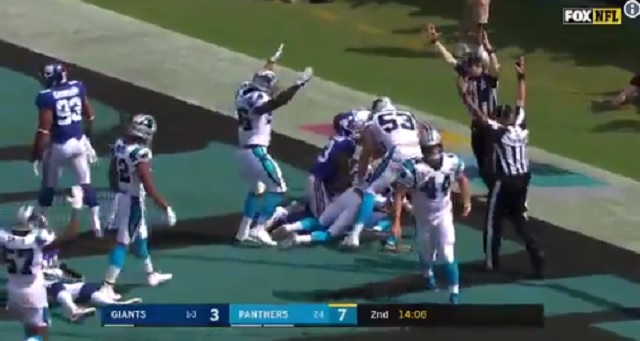 Early this morning on ESPN Odell Beckham Jr. threw some shade at Giants QB Eli Manning in an interview with Josina Anderson.

During today’s Giants-Panthers game, Beckham gifted the Panthers a touchdown when he muffed a punt and kicked into the end zone.

Odell Beckham tried to throw off DJ Moore, who was the gunner trying to down the punt, but the punt hit Beckham's leg. Jenkins tried to corral it and couldn't, kicking it into the end zone. Colin Jones beat out Eli Apple to make the recovery.

Odell Beckham Jr. called out Eli Manning and then did a v not good job of doing his own job pic.twitter.com/oZbs5rJR31

Whether you approve of Odell Beckham's comments or not, he can't come out after that interview and have a stinker of the game. This feels like his performance in Green Bay in the playoffs after he was ripped for that ill-advised boat trip to Miami.

Why oh why did Odell run towards the ball? First rule for punt returners: Get away from the ball if you are not fielding it.

@obj can’t blame anyone for that Carolina TD but yourself. Not a scheme problem nor a QB problem. Looks like a an OBJ problem.

What was Odell thinking?! 😂😂 pic.twitter.com/Mj2YkwrVmq

Trade Odell for a washing machine & a bag of chips

Odell Beckham is really living up to that massive contract 🙄

What the fuck is Odell doing LMFAO https://t.co/BmEHulXTMQ