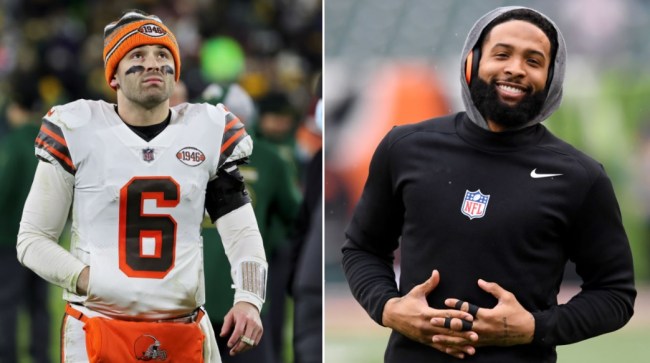 Baker Mayfield had another rough game and NFL fans trolled him hard for it.

On Christmas day, Mayfield threw four interceptions in the Browns’ brutal 24-22 loss to the Packers.

Final: #Packers 24, #Browns 22. Baker Mayfield threw a career-high four interceptions. The final one came on third-and-10 from the 50 with 43 seconds left to play, when Cleveland was driving to set up a potential game-winning field goal. Cleveland is now 7-8 with two games left.

Baker Mayfield threw 4 interceptions today, the most by a Browns QB since 2012.

Think about all the QBs the Browns have had in the last 9 years — none of them ever did it. pic.twitter.com/t3EB0Jtsoi

I’m never going to forgive all of the clowns who tried to say that Odell Beckham Jr was the problem with Cleveland’s offense.

Somewhere Odell and his dad are loving this pic.twitter.com/Te21surJ5V

Odell looking at these Baker passes from LA like pic.twitter.com/Q6QzB4ZOs8