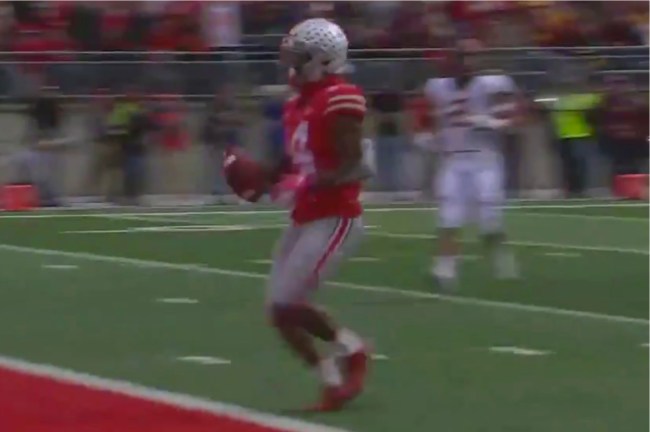 The Ohio State Buckeyes are having a difficult time with the Minnesota Gophers at home today, with the No. 3 Bucks currently leading 17-14 late in the first half. Struggling to run the ball or get off the field defensively, one of the team’s top wide receivers, KJ Hill Jr., decided to take matters into his own hand to help jumpstart the offense.

That’s because Hill just made a nasty one-handed touchdown grab on an absolute bullet from quarterback Dwayne Haskins, which has to have New YOrk Giants superstar, Odell Beckham Jr., be smiling somewhere — since, you know, OBJ’s sort of reinvented the whole one-handed snag trend. Take a look at Hill’s grab.

What a catch by KJ Hill followed by an even better celebration pic.twitter.com/RZd230BuVJ

The catch itself was 100. The swag to tuck the ball away after the catch on his way to the end zone was ballsy. The celebration was even better, acting as if the ball was permanently stuck to his hand. Somebody check this dude for Stickum, ’cause that shit ain’t falling off anytime soon.

Kudos to KJ Hill for his Beckham impersonation, but we all know there’s nothing like the original, so sit back and enjoy some of OBJ’s all-time top on-handed catches.

It’s Odell’s world and we’re just trying to live in it.