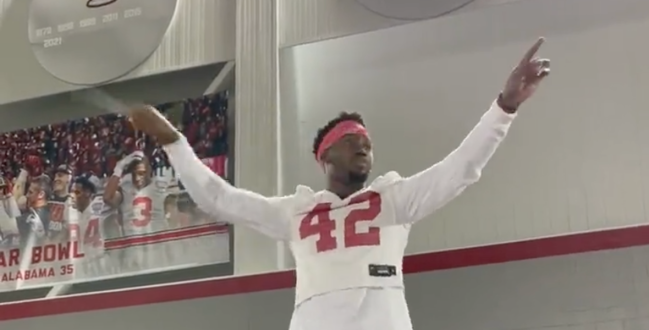 The winner will have a firm shot at the College Football Playoff and the loser will miss out on the Top 4. It’s intense.

As rivalry week gets underway, one of the unique Ohio State traditions returned on Sunday night. Every year, the OSU football team and The Best Damn Band in the Land get together to kick things off.

It’s a great opportunity for the players to get loose and go crazy. It gets rowdy.

While the band performs a private concert to get the team pumped up, some of the players get the chance to conduct. When cornerback Lloyd McFarquhar Jr. — who has one of the best names in college football — got his chance to step up the ladder above the band, he did not squander it.

The 5-foot-9, 180-pound Ohio-native turned tf up. As the Buckeyes band played the school fight song, McFarquhar danced his ass off, hitting every beat with the baton.

The best part of his performance comes at the 30-second mark, when he and his teammates direct the call-and-response section.

Not ❌uch better than a private concert for @OhioStateFB the week of The Ga❌e. #GoBucks pic.twitter.com/V8cGwJYD4f

McFarquhar thinks it might be time to pursue a career in music, and although that might not be in his best interest, his guest performance will live forever in history.