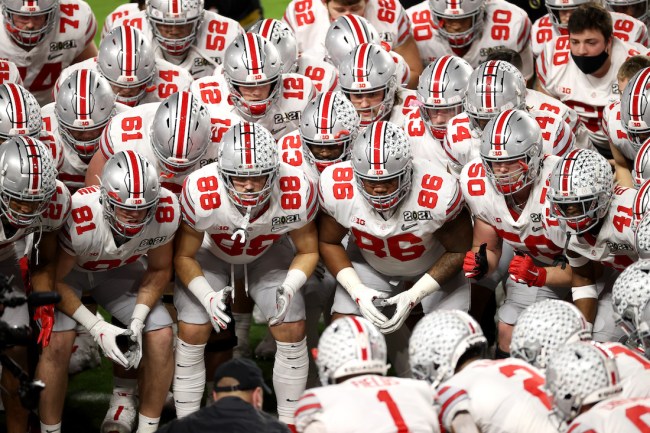 Several Ohio State football players were allegedly involved in some extracurricular activities with a 41-year-old massage therapist who reportedly solicited the student-athletes for her services in hopes of having sex with them. The woman has since been banned from Ohio State’s campus and has had her license permanently revoked by the Medical Board in Ohio.

According to the investigation — which explicitly highlights that no “interactions with the football student athletes rose to the level of any crimes,” per the Franklin County Prosecutor’s Office — the woman agreed to surrender her license back in March to avoid investigation regarding her “sexual misconduct with one or more clients,” as defined in the Ohio Administrative Code.

The university hired a law firm to assist with the investigation, with the law firm interviewing 117 current and former Ohio State football players, as well as 44 current and former coaches/staff to determine any crimes or NCAA violations were committed. Neither did occur.

However, it was discovered that, of the players who received massages from the woman, 20 received non-sexual massages, and five had consensual sex with her — none of which were minors. Additionally, no coach or staff members knew anything about the massage therapist.

Per Buckeye Extra, the woman was persistent in her attempts to lure the Ohio State football players, regularly reaching out on social media — including high school prospects who recently declared to the Buckeyes on National Signing Day. She also allegedly sent explicit photos of herself to players.

The woman contacted and attempted to ingratiate herself with players through social media. She reached out to the newest of them on National Signing Day when they sent in letters-of-intent.

She was persistent in her pursuit of players, according to the report, and she sent explicit pictures and messages to players and continued even if players didn’t respond.

The massage therapist allegedly falsely claimed that she was employed by professional sports teams in an attempt to add to her credibility. After providing a massage and developing a friendship with one player who lived off campus in a building with other players, she knocked on their doors unsolicited to offer massages.

Following the investigation, The Ohio State University released the report to show transparency into the matter, as well as to educate athletes about the risks of being targeted on social media. The school’s athletic director, Gene Smith, was happy with how the players cooperated with the investigation, per Buckeye Extra.

The Ohio State football players are fortunate this didn’t become a serious issue that led to suspension, or worse, an investigation into any wrongdoing on their part. As we’ve unfortunately seen with the Deshaun Watson situation, these types of things can lead to plenty of problems. Luckily, the student-athletes avoided doing anything wrong, and this massage therapist was nothing more than a pariah who got busted for soliciting her services.