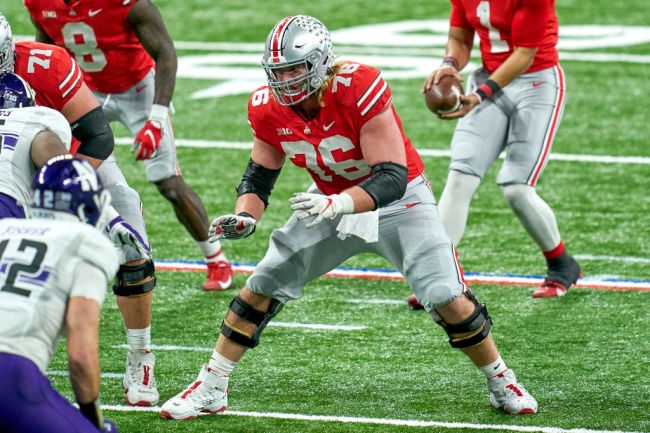 Less than a year ago, the NCAA did not allow student-athletes to profit from their own names, images, and likenesses. Ohio State center Harry Miller is making them look foolish for waiting so long.

The junior from Georgia was recently named to the Allstate AFCA Good Works Team and has an awesome history of humanitarian work. Nearly ever year since he was in seventh grade, Miller has gone on a mission trip to Nicaragua.

Now, he is taking the opportunity to use his platform and take his efforts even further. He announced on Tuesday that he will donate his name, image and likeness earnings to those in Nicaragua who need it.

As college athletes navigate the new name, image and likeness rules this fall, one Ohio State Football player already knew what he’d do with the money he’d make: donate it. Harry Miller is donating all of his NIL money to those in Nicaragua who need it. https://t.co/VXur6esu4r pic.twitter.com/ANy7pJJXcO

On his mission trips, Miller would help operate a school and distributed food and medicine to less-fortunate families in Los Brasiles.

“You don’t need much to have much,” Miller said to Spectrum Sports. “That’s probably the biggest lesson I’ve learned from Nicaragua.”

After Miller was named to the AFCA Good Works team, Allstate donated $10,000 to the charity of his choice. It further benefited those who live below the poverty line in Nicaragua.

Prior to receiving the honor, on July 1, the NCAA passed legislation that allowed an athlete to financially benefit off of his or her name, image and likeness. Miller immediately used that opportunity to give back.

He spent the summer selling merchandise through an online pop-up store and earned over $1,000. All of the profit went to Mission for Nicaragua.

THANK YOU! You made the difference in the life of a child living in extreme poverty. We sold 200 items, profited just over $1k for #M4N That’s a lot of food & meds for our kids! Items will ship by 8/4. SO to Adam of Corporate Specialists for #MakingTheMerch
We’ll do it again soon pic.twitter.com/N2rHgumgBs

Miller’s efforts is exactly what NIL is all about. College athletes can not only make money for themselves, but they can use their platforms to give back and make a difference.