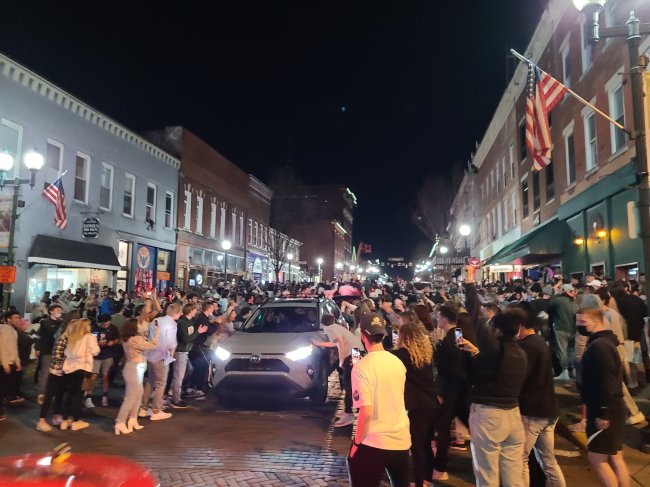 This year’s NCAA Tournament has been absolutely bonkers and March Madness is living up to its name. It is the first time that four teams seeded 13 or worst made the Round of 32. We’ve seen 15-over-2 seeds, 12-over-5 seeds, 10-over-7 seeds, 11-over-6 seeds and a pair of 13-over-4 seeds. That’s where we begin here. Late on Saturday night, 13-seed Ohio University took down Virginia in dramatic fashion, behind one of the best stories in college basketball. After the win, Bobcats fans went crazy. For those of you who don’t know, Ohio University is known for a stretch of bars on Court Street in Athens, Ohio. They party as hard as anyone in the country and last night was no exception. The announcers even made reference to the historic area.

“I feel a rumble on Court Street in Athens, Ohio!”
– @debbieantonelli pic.twitter.com/QZqw1MWIsq

As the buzzer sounded and the upset went final, the Ohio basketball team stormed onto the court while, almost 300 miles away, the students did the same.

Ben Vander Plas after Ohio upsets Virginia: "Ben Roderick came up to me after the game, he said, 'I bet you Court Street's going crazy right now.'"

Ohio Bobcats forward Ben Roderick predicted the giant celebration and he was right. Hundreds of fans, mostly students, exploded into the downtown area and went buck wild. The crowd grew so big that police had to shut the street down to traffic and let the party rage into the night.

The will be partying on Court Street tonight in Athens, Ohio! 🏀
Video my son sent me. ⁦@OhioBobcats⁩ ⁦@OhioMBasketball⁩ #upset pic.twitter.com/9ECmwkoHjU

It's now the crowdsurfing part of the celebration pic.twitter.com/4UvdmMhX3r

Ohio advanced to play 5-seed Creighton in the Second Round on Monday, and if you are a lover of college sports, you’ll be rooting for the Bobcats. Not only is Jason Preston one of the most humble, deserving individuals in sports, but their head coach Jeff Boals was born in Ohio, played at Ohio and calls Ohio his “dream job.”

Perhaps more importantly, can you imagine Court Street if the Bobcats get a Sweet Sixteen birth? Imagine a Final Four run?!