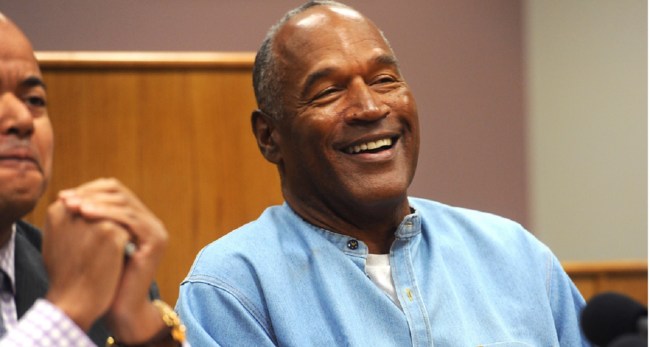 It’s OJ Simpson’s turn to chime in on the Will Smith/Chris Rock situation.

On Sunday night, Smith slapped Rock in the face during the Oscars for making fun of his wife’s bald head with a G.I. Jane joke.

Since then, everyone and their mother has had an opinion on the matter, including O.J. Simpson, who shared thoughts on his Twitter feed.

He was wrong but I understand the sentiment. pic.twitter.com/aURe1pyubg

“It was unfortunate, I think Will was wrong, look I understand the feeling, in my life I’ve been through a lot of crap and every comedian in the country had an O.J. routine, don’t think I wouldn’t want to slap one of those guys but you gotta accept that it’s humor and I didn’t even think that it was all that egregious, I thought it was semi-unfunny joke.

Of course, the Internet had hilarious reactions to O.J.’s comments.

Ah yes, The Will Smith Oscars take we were all waiting on https://t.co/wVl6kiUqfJ

What Will Smith did to Chris Rock was one of the worst and most violent things you can do to another human. I’m happy someone like OJ Simpson is speaking out about this. We need more good, non violent people like OJ talking about things like this. https://t.co/tJFhD9TPtY

“I understood the feeling” pic.twitter.com/DAf96Uje7Q

I’m not sure Smith wanted your help, stabby