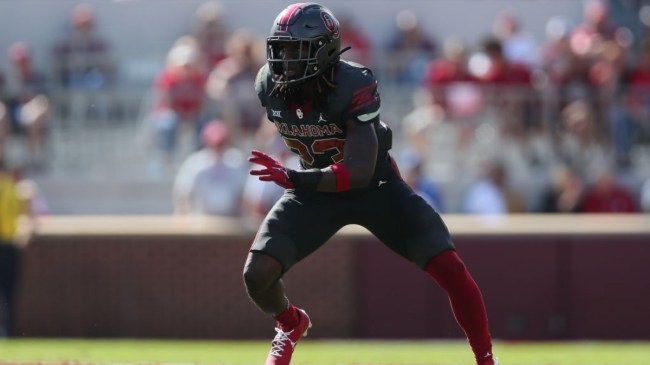 If you were looking to see some defense in college football today, the game between Kansas and Oklahoma was probably not the game you wanted to be watching. There was very little defense to be found in this matchup in the first half.

The teams each scored on their on their first 2 possessions before an Oklahoma fumble finally brought a possession to an end without points. That slowed things down a bit, but it surely didn’t stop the scoring onslaught.

Those 28 first quarter points were followed by another 28 in the 2nd quarter for a 35-21 score at the half.

While the first half of this game wasn’t exactly a defensive showcase, there was one incredible moment for Oklahoma’s defense.

In the 2nd quarter, Kansas was driving as they tried to once again answer an Oklahoma touchdown. They had a 1st and 15 from Oklahoma’s 40, trailing 21-14. Kansas quarterback Jason Bean dropped back to pass and immediately began rolling out to his left.

He quickly spotted a receiver open near the left sideline and tried to drop a pass in to him over Oklahoma’s CJ Coldon.

Colton had other ideas. He leapt up and got a hand on the pass, batting it down to give himself a shot to intercept the pass. He took full advantage of the opportunity. He fell to the ground after his leap, but on his way down, was able to make an unbelievable 1-handed interception.

CJ COLDON GETS UP FOR THE 1-HANDED PICK! 😵‍💫

Oklahoma made the most of the interception, going down the field and scoring a touchdown to extend their lead to 14. The Sooners would extend that lead as far as 21 and they have Coldon’s unbelievable grab to thank for them getting the chance to start taking control of this game.