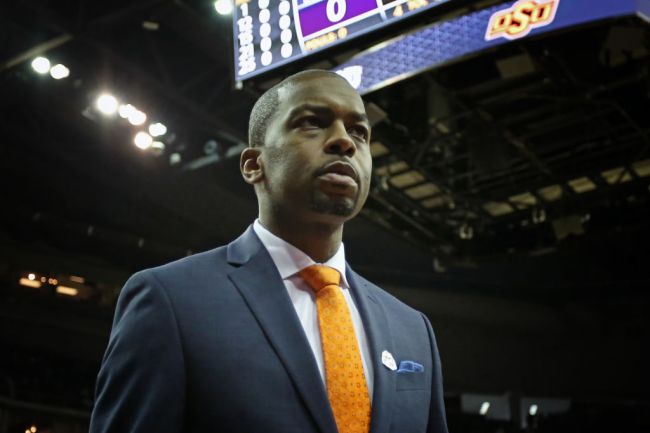 The Oklahoma State men’s basketball team will be banned from postseason play in 2022 after the program’s appeal of a one-year penalty was officially rejected on Wednesday. Head coach Mike Boynton is not pleased with the NCAA’s decision and eviscerated the organization during his press conference following the news.

“I’m disappointed, disgusted, appalled, frustrated, but somewhere in Indianapolis, there’s a group of people celebrating,” Boynton said while referencing the NCAA’s headquarters. “They won. Our players don’t deserve and shouldn’t have to deal with this.”

The one-year ban was originally given to the Cowboys’ program in June of 2020 as a result of an FBI investigation into former associate head coach Lamon Evans. Evans was sentenced to three months in prison in 2019 for accepting between $18,150 and $22,000 in bribes to steer players from South Carolina and Oklahoma State to certain agents and financial advisers.

Oklahoma State believes this is the first time a school has ever been given a postseason ban despite no violations in the areas of institutional control, failure to monitor, recruiting, head coaching accountability, or academic fraud. The Cowboys believe the NCAA is making an example out of them.

Boynton cried during the opening remarks of his press conference on Wednesday while laying out the situation as clear as can be.

“It was a single NCAA violation. One player received $300. One player. Not a recruit. Not a future recruit. Not a family member. One current player received $300. And in and of itself, because it was self-reported by us, it’s a secondary violation. So the punishment is you pay the money back, serve your suspension — which the kid did — and you move on.

“It’s no wonder that nobody trusts [the NCAA]. They don’t have to come and do this, and answer questions, and talk to kids, and talk to parents.”

Boynton even went on to name members of the NCAA enforcement staff while calling them out about the ruling.

Oklahoma State is the first school to be given a postseason ban by the NCAA because of the FBI investigations involving Evans. Auburn and Arizona also had assistant coaches plead guilty, self-imposed postseason bans last season.

No coach has ever publicly bashed the NCAA as Boynton did on Wednesday. His press conference is well worth watching.