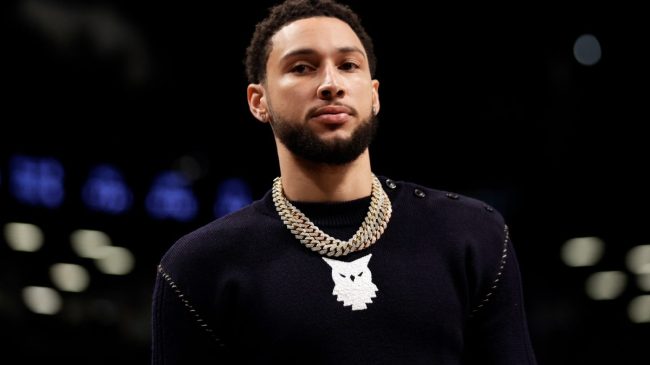 The Nets face elimination tonight in Game 4 of their opening round matchup versus the Celtics.

After three straight losses, Brooklyn will need to land a win on Monday to keep their season alive. Unfortunately, they’ll be without star forward Ben Simmons, who’s been ruled out for yet another contest.

Fans and media were hoping to see Simmons return to the court to help lead his team. Instead, they’ll be left disappointed, once again, as the saga continues. The former first round pick hasn’t played in a game in nearly a year.

The last time he did see the floor was as a member of the Philadelphia 76ers. The Sixers lost a playoff series to the Atlanta Hawks his last time out, and he received a ton of criticism for poor play. The forward averaged less than 10 points a game, including a minimal seven-point output in the series ending loss.

That was the beginning of the end in Philly.

But with Brooklyn down 3-0 in their current series with Boston, it’s actually a tweet from the year before that’s beginning to go viral on social media.

In the 2019-20 season, the 76ers were swept in the playoffs by the Boston Celtics. After the series ended, Simmons took to Twitter to post his thoughts on how the season ended.

Watching my team get swept hurt, and I don’t ever want to feel that way again.

With his new team, the Nets, on the verge of being swept by those same Celtics, social media has been quick to point out the irony. Especially considering Simmons has done nothing to help his teammates this postseason. Literally “watching” another team get swept from the sidelines could sting as bad in Brooklyn as it did in Philadelphia.

Check out some of the hilarious media reaction below.

@OldTakesExposed This is it, cold take of the year 😂😂

It blows my mind this tweet isn’t deleted https://t.co/zusAdklgZq

Bro had a change of heart💀 https://t.co/3ecpJL1nvh

The Nets will hope to avoid a sweep on Monday. They’ll have to do so without Simmons.

If Brooklyn loses, you can bet a number of social media users will reference this tweet.