Ole Miss Pitcher Wes Burton Talks To Himself On The Mound Like An Absolute Maniac, Is On A Quest To 100 Or Death 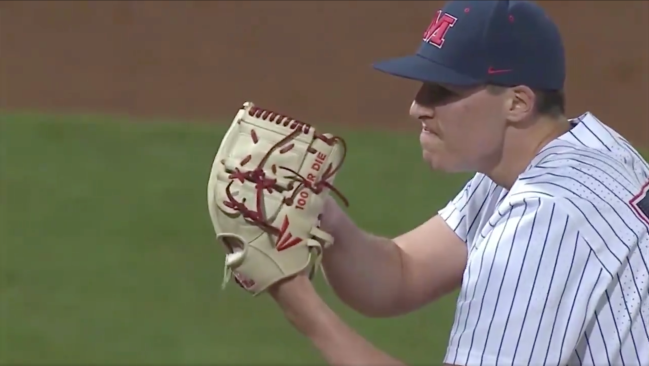 Pitchers are a different breed. Ole Miss baseball dominated Alcorn State 11-1 by way of run rule in the eighth inning on Tuesday, but that didn’t stop Wes Burton from throwing like it was the bottom of the ninth in Game 3 of the College World Series. He is a maniac in the best sense of the word.

The 6-foot-8 (!!), 235-pound sophomore is an absolute lunatic. His freshman campaign was cut short due to COVID-19, but he made four appearances and one start with a 1.42 ERA in 6.1 innings pitched. He quickly established his presence on the bump against No. 1 Louisville in Ole Miss’ opening series of 2020 with his unusual approach to getting himself ready to throw.

Wes Burton: The fine line between a Psychopath & a Pitcher.

Getting yourself jacked up against the nation’s top team is crucial, but he doesn’t stop there. No matter the opponent, Burton is talking to himself and the hitter like a full-blown serial killer. Imagine being on the other side of the equation and stepping into the box against a guy who is screaming obscenities to himself.

This won’t be the first time that Burton’s demeanor has been compared to Mad Max Scherzer and it won’t be the last. They both are certifiably insane in their approach to toeing the rubber and dominate batters with nasty cheddar.

The Santa Monica, Calif. native backs up his antics with absolute gas. He has six strikeouts in three innings this season and is on a quest to hit 100 miles per hour with his fastball. His motto is ‘100 or die,’ which is an all-gas, no-brakes mentality that Burton carries to the diamond.

Ole Miss is ranked No. 4 in the country with opening-weekend wins over three top-10 teams in Texas. In their last six games, the Rebels have won by a combined score of 63-20 and have an incredible amount of fun doing it. Burton is one of a personalities on the team that is destined for a deep postseason run. We have plenty of tickets remaining on the Ole Miss bandwagon and we’d love to have you join us on this journey. Beware, however, that it usually ends in heartbreak— but this year is different. It just feels right.