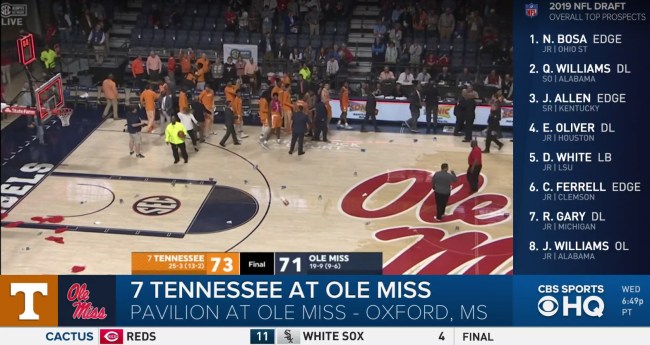 Ole Miss fans expressed their displeasure by showering the court in trash after a controversial no-call by referees secured a 73-71 win for Tennessee over the Bulldogs. A completely rational move considering the fact that Mississippi borders Louisiana.

Here’s what made them so angry.

No. 7 Tennessee’s Grant Williams scored the go-ahead basket to put the Vols up with just four seconds to play. Ole Miss then inbounded the ball to Devontae Shuler who raced down court, throwing up a hail mary three while running directly into Tennessee guard Admiral Schofield, who referees believed had drawn a charge on the shot.

In response to the call, Ole Miss coach Kermit Davis threw his jacket to the ground in protest and was given a technical foul, so naturally, Rebels fans joined in on the throwing things fun by throwing trash, drinks, shakers, and even shirts onto the court when the game came to an end.

Wild sequence at the end of the Tennessee-Ole Miss game. Grant Williams with the go-ahead bucket and Admiral Schofield with a game-winning charge 30 feet from the rim.

Ole Miss fans are throwing garbage onto the court in protest of how the game just ended against Tennessee. pic.twitter.com/TAsuMwGkc5

“It was close,” Davis said after the game when asked about the charge call. “Our fans were unbelievable, and I shouldn’t have reacted the way I did. I threw my jacket, and I think that might have enticed the crowd, so I apologize for that. I was just being competitive in the moment.”

At least two Tennessee players — guard Lamonte Turner and forward D.J. Burns — were hit in the face with objects thrown by fans.

Turner raised his right fist in the air and looked toward the Ole Miss student section as he exited the floor and was struck in the face with an object before walking through the tunnel toward the Vols’ locker room.

Burns was hit in the face with a red shirt as he left the floor. He unfolded the shirt and held it toward the Ole Miss students as he walked through the tunnel under fans.

Ole Miss fans pelted the floor with trash in a heartbreaking loss to No. 7 Tennessee https://t.co/TztfL54gJi pic.twitter.com/lxmPLzNLFw

#Vols’ Grant Williams: I’m just surprised Admiral [Schofield] took a charge. I didn’t know he could do that. That had to be his first this season.

Schofield from across the room: Second! Second! I had one earlier this season!

Hey, Rebels fans, look on the bright side. D.K. Metcalf has been really impressive so far leading up the NFL Draft!