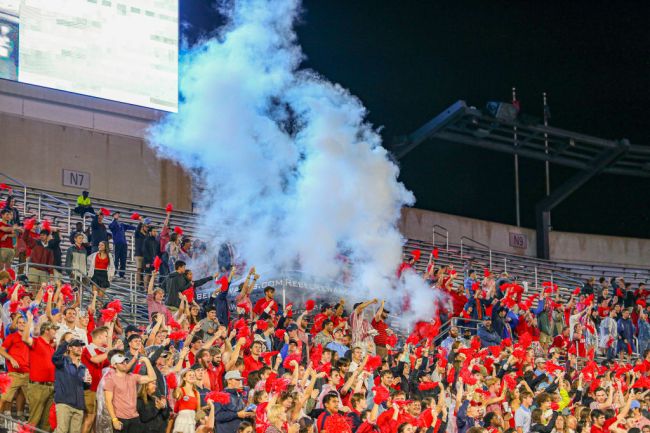 Louisiana State football took a beating both on and off of the field on Saturday. The Bayou Bengals and their fans rolled into Oxford, Mississippi for a rivalry game between two teams on very different trajectories and left with a black eye. Perhaps even literally.

At some point during the 31-17 blowout, a massive fight broke out in the stands. Per (probably bias but truthful) sources who were on the scene, a group of LSU fans decided to join the Ole Miss student section.

While that is always okay and opposing fans are always welcome to join the party, it comes with stipulations. You are going to get heckled and you are going to have fans who had one drink too many and take the heckling too far.

No matter what school you go to, it’s going to happen. Especially during a rivalry game in the SEC.

In addition, the golden rule is that the opposing fan in the student section is not allowed to cause a scene. He/she is welcome to chime in with a chirp or two throughout the game, especially if his/her team is winning, but there is a line that cannot be crossed.

Per my sources on the scene, the Tigers fans took it too far. That isn’t to say that I condone what transpired, but sometimes it’s just what happens— especially when someone is being particularly obnoxious.

During Saturday’s game, a huge brawl broke out amongst the LSU fans and some Ole Miss pledges. The scene was wild and both sides were trading big blows back and forth.

The video of the fight is crazy, but I want to make note of something that is far too funny. At about the five-second mark, an LSU fan (you can tell because he is wearing jeans) turns back to his friend and says “HOLD MY COSTAS,” referring to his sunglasses.

If you are from the South or went to an SEC school, you know just how funny that “HOLD MY COSTAS” really is. If you didn’t, and you don’t get it, the “HOLD MY COSTAS” is basically the country equivalent of a fight breaking out on the streets of New York City and someone saying “HOLD MY GUCCIS!”

The fight itself is one thing, but the moment where that long-haired LSU fan turns back to his friend could not be funnier. Hotty Toddy.