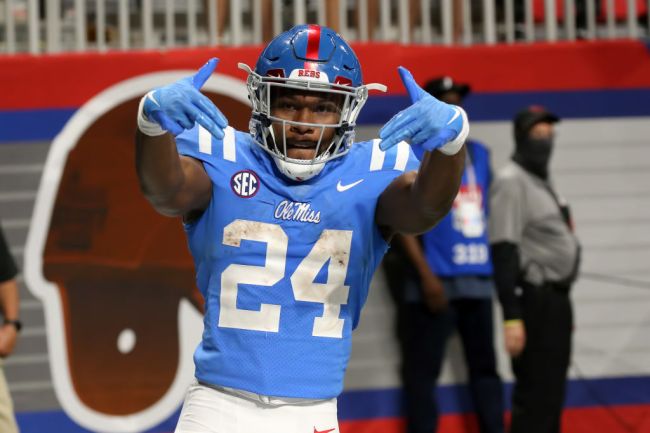 Ole Miss and Louisiana State may not agree on much, but when the two get together, it’s always a good time. And, despite their differences, both schools have fired Ed Orgeron as head football coach.

At one point, during a weather delay ahead of Ole Miss’ game against Wake Forest in 2006, Coach O had his team run a full-padded, 80-play practice. The Rebels then lost to the Deacon Demons 27-3.

Thus, when LSU hired Orgeron back in 2016, the Ole Miss fanbase knew what was coming. Sure, the Tigers got their national championship, but that team was amongst the greatest in college football history and anyone could have won it all with that roster.

Now, less than 21 months after hoisting the College Football Playoff trophy, Orgeron is on his way out. He will finish up the 2021 season and then collect $17.8 million over the next four years not to coach in Baton Rouge. He doesn’t seem to shaken up about it.

To celebrate his final return to Mississippi, the football team is taking one last parting shot at Coach O.

Earlier this year, ahead of LSU’s game against UCLA, a video showed Orgeron roast a trash-talking a fan over his “sissy blue shirt.” After beating the Tigers in Pasadena, the Bruins trolled Orgeron over his comment.

Since then, Ole Miss head coach Lane Kiffin took the “sissy blue” comment and ran with it. He has made multiple references to the Rebels’ powder blue uniforms.

1-0 is all that matters!! Rocking that sissy blue @OleMissFB Thanks to all that fans that showed up. 🙏 🧊 🚂 https://t.co/r26WwSICcF

Miss u Steve and that sissy blue dog 😂 @OleMissFB show up this Saturday #PackTheVaught #ComeToTheSip https://t.co/oaulbBl2lP

I can tell you today our head coach was @WarrenSapp. Had to get the defense right like @Buccaneers vs @MichaelVick in the @GeorgiaDome and he did it! If you built they will come @OleMissFB Love these players, coaches, and Warren even in our sissy blue! 🐯 pic.twitter.com/CPAbu2rzMb

And now the Rebels are taking it one step further. Against LSU this weekend, Ole Miss will wear its powder blue helmets and jerseys.

In the uniform announcement, the team said “we love that sissy blue.”

We love that sissy blue.

The final matchup between Orgeron, his current former team and his former former team kicks off at 3:30pm ET on CBS. Will the sissy blue go 2-0 against LSU?