Ole Miss Professor Complains About How Much Money Lane Kiffin Makes, Gets Bodied On Twitter 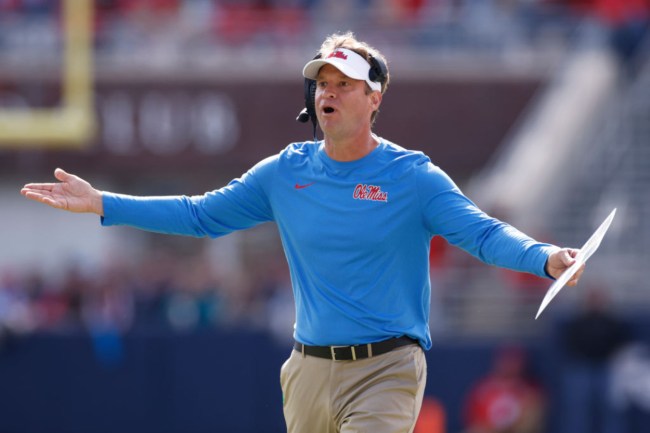 Ole Miss held onto head football coach Lane Kiffin despite a handful of major jobs opening up around college football, many of which he was linked to in some capacity. To keep Kiffin in Oxford, and as a result of a 10-2 season, Ole Miss had to hand Kiffin a new contract, and it was a large one.

Kiffin now has a contract in place with Ole Miss through 2025 and will make a salary $7.25 million next season. That number will increase $100k each year, on top of other incentives attached to his new deal.

While Ole Miss football fans are pleased with Kiffin’s new deal, not everyone in Oxford is happy about the money he’ll be making.

Associate professor Anne Twitty reacted to the news of Kiffin’s contract on Twitter pointing out the fact how little money she makes compared to the school’s head football coach. Twitty thinks her job is more important than Kiffin’s, and maybe it is, or maybe it isn’t, but airing your grievances on Twitter for everyone to see it is a rather bold play.

Teachers deserve to be paid more than they do, across the board, we all know this, but comparing salaries to the head football coach who generates millions for the university and the city isn’t a winning formula.

I'm a tenured, associate history professor, in my 12th year at the University of Mississippi, and I'm not paid even 1/100th of the football coach's new salary. https://t.co/tfW9KLF9t3

Ole Miss fans were quick to call out Twitty for her tweet. Here’s a look at some of the best reactions:

You also cant scheme open a beautiful wheel route to a fullback so I dont see the issue here. https://t.co/clNtbFGMB5

I’m a tenured, associate professor in something few ppl care about and I don’t make near as much money as the coach of something that way more ppl care about! The outrage! Give me more coin! https://t.co/W2GQBVO5gU

Maybe if Twitty does want a bit of a pay bump she should focus on getting her Rate My Professor score up. A 2.1? We can do better, Professor Twitty.