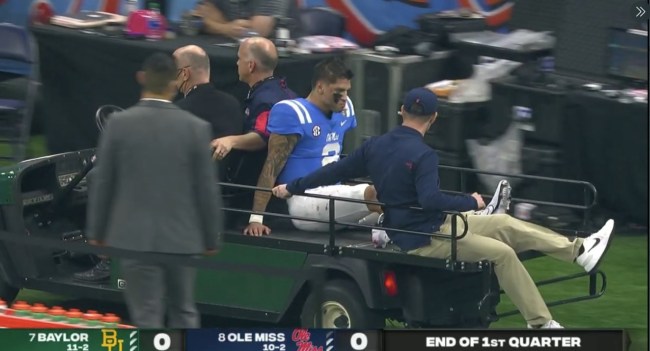 Ole Miss QB Matt Corral, who many consider to be a top 10 pick in the upcoming 2022 NFL draft, appeared to suffer a serious injury in Saturday’s Allstate Sugar Bowl.

In the first quarter of the Ole Miss-Baylor game, Corral had to be carted off the field after getting tackled in the backfield.

Matt Corral has left the field in a lot of pain after this play. Praying for him 🙏#Baylor #Bears #SicEm #BUncommon #OleMiss #Rebels #HottyToddy #SugarBowl #CollegeFootball #BowlSeason pic.twitter.com/Be3NM9i33r

Ole Miss QB Matt Corral was carted off the field after appearing to injure his leg in the 1st quarter of the Sugar Bowl pic.twitter.com/Fu99R1AWRv

Corral was later seen returning to the sideline on crutches.

An injured Matt Corral gets a standing ovation from Ole Miss crowd at Sugar Bowl pic.twitter.com/45b3fEgxe9

Earlier in the week Corral explained why he decided not to opt-out and play in the Sugar Bowl.

“I mean, it was just my teammates … I never questioned it … If I was them (Ole Miss teammates), in their shoes and they had a quarterback in the same position … I just couldn’t live with what they would think of me, like just leaving and just being like ‘alright that was the last game’ and nobody knowing that was the last game,” Corral told reporters. “The only reason why I say this is because no one really understands how close we really are. It just would’ve been the wrong thing to do, just not playing and just holding out on them.”

Fans immediately noted that Corral should not have been playing and rising injury during a meaningless bowl game months before the NFL draft.

Matt Corral's on the sidelines on crutches with red eyes, and all Tessitore can talk about is how risking a career ending injury is "doing it the right way."

You can celebrate Corral's toughness – which was never in doubt – without disparaging other players. Absolutely shameful.

Matt Corral potential 1st round pick in 2022 injured and in serious pain but yeah let’s get mad at these kids for opting out of meaningless bowl games.

Matt Corral getting injured is why I aint ever gonna be mad about players opting out of bowl games that are now meaningless because of the playoff.

Ole Miss QB and potential first-round pick Matt Corral just had his leg rolled up on and needed to be helped off by trainers. He is now being carted to the locker room.

Perfect example as to why players opt out. Hoping this isn't something serious.