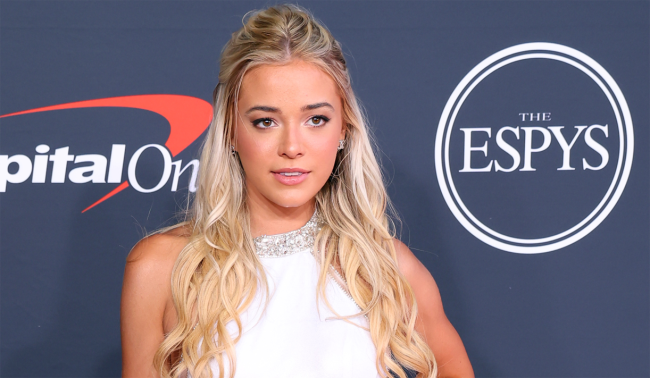 Popular LSU gymnast Olivia Dunne apparently still isn’t over the hatchet job the New York Times recently published, using her as their main example of everything they think is wrong with NIL money and female athletes.

“Female college athletes are making millions thanks to their large social media followings,” the Times wrote in a feature that had a photo of Dunne right at the top of it. “But some who have fought for equity in women’s sports worry that their brand building is regressive.”

Numerous people have come to Dunne’s defense, not that she needs it (she reportedly has an NIL valuation of $2.3 million), including the poster woman for making boatloads of money by combining sports with her good looks, Paige Spiranac.

“People are saying, ‘Stop oversexualizing yourself, you’re taking women back,” said Spiranac. “No one’s going to take you seriously.’ And I think that is a big stinking pile of sh-t.”

Speaking about Dunne, Spiranac said, “She’s built a successful business (at 20) all while being a student-athlete. That’s badass.”

Yes, it is. So is the way she’s handled all the negativity that was spouted in the New York Times article.

First, she clapped back at the Times by sharing the very photo that appeared at the top of the article in an Instagram story with the caption, “@nytimes is this too much?”

Then on Wednesday, taking to her favorite social media platform TikTok, where she has 6.3 million followers, Olivia Dunne posted a quick video showing off her supposed “Christmas Wish List.”

On the list with checkmarks next to each were a PS5, more friends, a sugardaddy, and be on NY Times.

Dunne then mouths the words, “Oh my God!” and waves no at the camera.

“I’d rather a lump of coal,” she captioned the video, which has at this point been viewed over 1.6 million times.

Last week, Dunne posted another TikTok video (which was watched 2.2 million times) that was a more subtle shot at the New York Times.

The Cavinder twins, Haley and Hanna, were the subject of a much more progressive profile on female athletes and NIL

The Cavinder twins, Haley and Hanna, basketball stars at Miami, have partnered with more than 40 brands, thanks to the NIL rules.

NIL tracking website on3.com wrote about the sisters, “Maybe no two athletes have defined the NIL era more than the Cavinder Twins.”

The Athletic recently published a very different profile on the 21-year-old Cavinder twins that was pretty much the exact opposite of the New York Times article.

“Just because they took their opportunities with NIL, that doesn’t mean their primary focus isn’t basketball,” Miami guard Karla Erjavec said in the story. “That’s where people have to switch up their perspective. When we were recruiting them, I talked to them and the only thing they talked about was basketball. They just want to win.”

They are most definitely, as Charlie Sheen famously used to say, #WINNING.