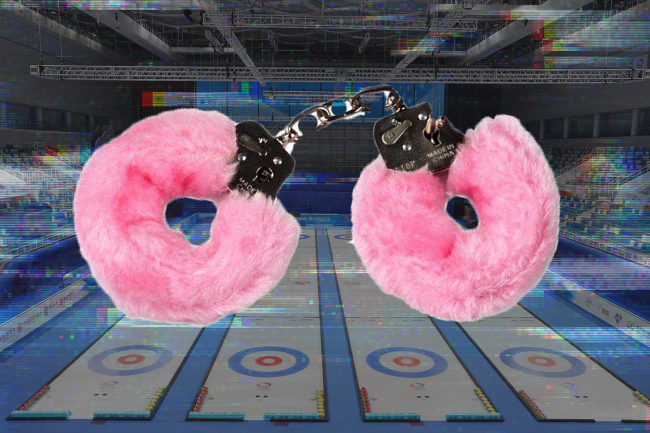 EasyToys, a sexual paraphernalia website, bills itself as “the market leader in the Netherlands and Belgium.” It sells exactly the types of things that you would expect.

In an effort to reach a larger international market, it sponsored an Olympic Qualification Event in the Netherlands, about 90 minutes north of Amsterdam. Fourteen teams were competing for the final two coed births to the Beijing Winter Games in February.

EasyToys was really excited about the sponsorship:

“We are extremely proud to be the main sponsor of the Olympic Curling Qualifying Tournament. It is a sport that everyone can participate in. And that is precisely the beauty of this sport in times when people, more than ever, are looking for connection. Only by publicly promoting our mission can we start the conversation about sexual wellness. And once again it appears that this is still badly needed. We continue to break taboos and will not just be wiped off the ice!”

As a part of the sponsorship, EasyToy’s ads were displayed in four spots on the playing surface. Its name was also printed along the hog line, which is a prominent part of every match.

Vicky Persinger gets United States 🇺🇸 off to a flying start with a double take-out that sets up a massive steal of four in the first end. 💪#OQE2021 #curling #Roadto2022

However, the sponsorship did not go over well.

Rather than being wiped off of the ice, the entire broadcast was wiped by NBC. When viewers went to tune-in to watch the U.S. duo play Japan on Saturday, they found that it was not available.

Per the tournament’s promoter Dagmar van Stiphout, organizers informed the World Curling Federation of its sponsorship a few weeks ago.

When he found out that the broadcast had been cancelled, he gave an incredible response about normality from country to country,

“I’m not the right man to have an opinion what is normal in which country,” promoter Dagmar van Stiphout told The Associated Press. “I think they’re also surprised, but it’s best to ask them.”

Despite the way in which things have played out, van Stiphout says that the tournament will go on. And, in some ways, this controversy might be a greater ROI for EasyToys than the on-ice sponsorship itself. You can find their website HERE.